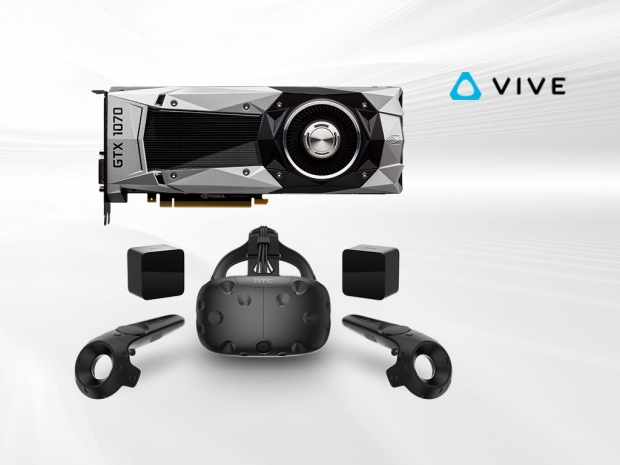 The bundle is limited to the US, and only while supplies last,  but it is still a neat offer considering that you pretty much get the GTX 1070 FE for $200. The standalone Vive VR headset costs $599 and also comes bundled with Fallout VR game. Considering that the cheapest GTX 1070 sells for around US $399.99, this sounds like a great deal.

The bundle gives you the headset, one nose rest, two face cushions, two wireless controllers, two base stations, the Link box, earbuds, all the necessary cables and chargers, including the 3-in-1 cable, a free month access to Viveport, Fallout VR code and Nvidia Geforce GTX 1070 Founders Edition.

Of course, now that the GTX 1070 Ti is out, the GTX 1070 is not that hot anymore and could get a price cut, especially since Black Friday deals are just around the corner, although we doubt it will drop down to $200.

This "GeForce GTX 1070 + HTC VIVE Bundle" bundle also allowed HTC to match the price of the Oculus Rift headset, which was recently cut down to US $399, at least if you count the GTX 1070 graphics card.

You can check out the bundle over at the dedicated page and hopefully, we will see similar or even better bundles over in Europe and other regions.

Last modified on 03 November 2017
Rate this item
(0 votes)
Tagged under
More in this category: « Celebs warned against peddling cryptocurrencies Space station gets its first printer upgrade in 17 years »
back to top