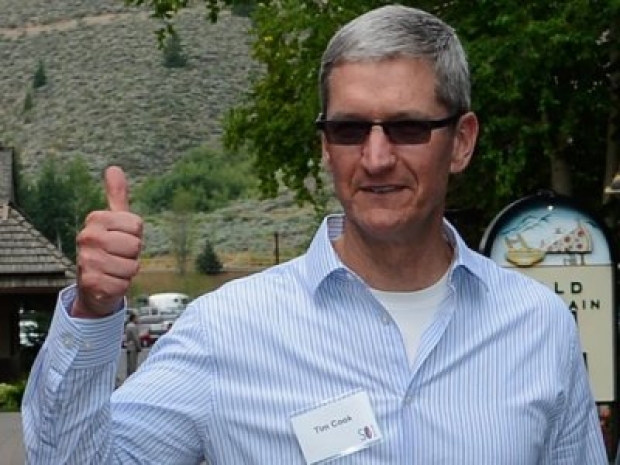 Must know something Wall Street doesn’t want to acknowledge

Wall Street has been so hyped by the Tame Apple Press it is expecting the new iPhone to sell trillions and the company’s share price to go through the roof. However, the fruity cargo cult’s CEO seems to think otherwise.

Tim Cook had a look at Apple’s current high share price and dumped $54 million worth of company stock, according to a regulatory filing. In fact, all the net shares he was awarded last week for his job performance.

Apple's Tim Cook collects 560,000 shares, half linked to the company's performance and the maximum allowed under the iPhone maker's long-term compensation program.

Shares hit an all-time high on Tuesday and have climbed 41 percent so far this year as people started to believe that the new iPhone might do well. But it might not be the greatest time to sell Apple shares, if you believe the company is on the cusp of (further) greatness.

None of the stock analysts who follow Apple recommended investors sell the company's shares, according to Bloomberg data. Cook didn't listen.

Cook's recent stock sales only make sense if Apple shares stick to a pattern of rising before the introduction of a new iPhone and stagnating or falling in the months afterward.

But only Apple's biggest optimists in the New York Times expect the company's revenue to rise 28 percent, as it did in the fiscal year after the iPhone 6 launch and that could mean shares drop as Wall Street realises that it will be more of the same from Apple

It is also trying to flog a more expensive phone and China is not interested.

If Cook has seen that, then it makes sense that he as offloaded his shares now. But he has seen something that the rest of Wall Street has not.

Last modified on 31 August 2017
Rate this item
(0 votes)
More in this category: « Logitech G unveils new Lightspeed mouse and keyboard Apple complains that 4K is overpriced »
back to top