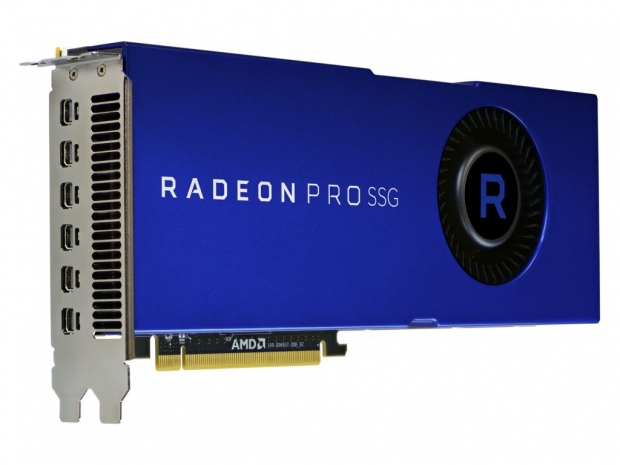 Radeon Pro SSG still has a long way to go

Today at Siggraph on the show floor we were told - although not able to physically see the card - that the post production demo that was being shown was utilizing the upcoming Radeon Pro SSG.

AMD announced at the Capsaicin event on Sunday night at Siggraph in Los Angeles, that it was releasing the Vega-based Radeon Pro SSG.  AMD's upcoming card pairs 16GB of HBM2 ECC memory with 2TB of NAND flash storage to provide users with extended memory support.  In the demo that we saw at the AMD booth, we were shown the upcoming card playing and "scrubbing" R3D (RED Camera) 8K content.  The one thing that we did notice was the jittery playback of the content even though it was stored in the NAND cache.  We were told by the AMD representative that users should clear the onboard cache on an hourly basis to maintain peak performance on the card.  This was slightly disappointing as we had higher expectations from what was presented on stage at Sunday's launch event. 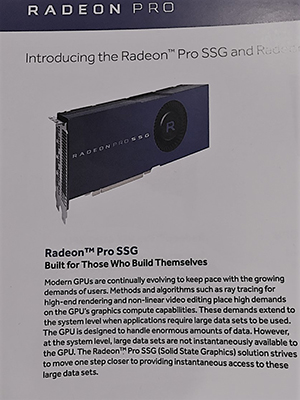 We followed up on a burning question that we have had since AMD started talking about the SSG product last year at Siggraph.  We asked  an AMD booth representative about the possibility of users being able to upgrade the NAND flash storage down the road by the end user as it had been disclosed previously.  Unfortunately, it was confirmed to us that this would not be possible, however at a future point AMD may explore additional SKUs with more cache storage.

Lastly and sadly for those who were hoping to get their hands on the cards sooner than later, we were told that shipments of the card should not be expected until some time later this year in Q4.