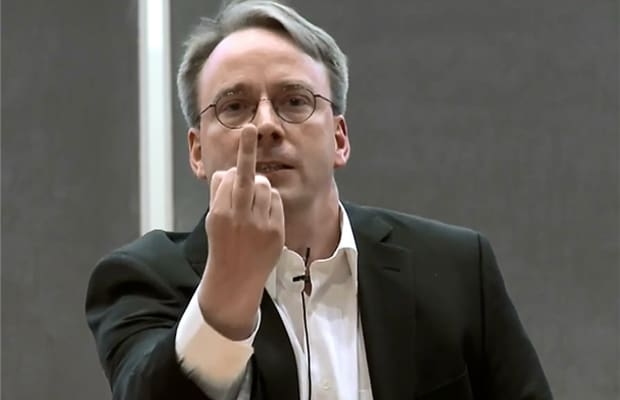 This Nvidia card is f*cking sh*t

The IT industry Mr Sweary, Linus Torvalds has found time in his busy schedule to review gadgets

Torvald’s us starting his own gadget review site on Google+: Working Gadgets.

Writing on the site Torvalds said that while he was waiting for his current build to finish, he decided to write a note about some of the gadgets hw got that turned out to work, rather than all the crazy crap that didn't.

“Because while 90 percent of the cool toys I buy aren't all that great, there's still the ones that actually do live up to expectations. So the rule is: no rants. Just good stuff. Because this is about happy gadgets."

So far Linus has reviewed an automatic cat litter box, a scuba diving pressure regulator, and a Ubiquiti UniFi Wi-Fi access point that complements his Google WiFi mesh network. We wonder when he will recommend an Nvidia GPU card?  Given that he said he will be only reviewing things he likes, we guess not.

Last modified on 24 July 2017
Rate this item
(0 votes)
Tagged under
More in this category: « Python is top programming language Corsair RMx PSU line now available in white »
back to top