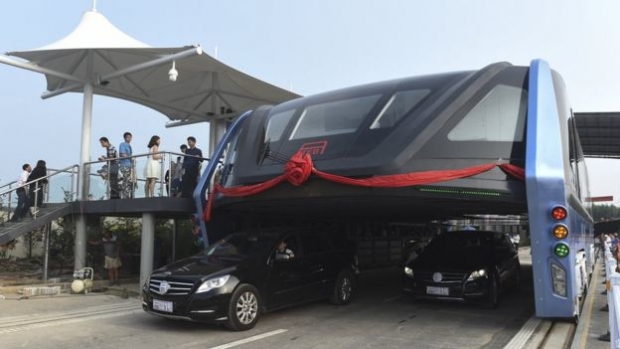 The Chinese government is investigating whether a car-eating bus, which captured the public’s attention a few years ago, might have been an elaborate fraud.

The Transit Elevated Bus, or TEB, is an electrically powered, 300-passenger vehicle that moves atop tracks straddling the highway while allowing road traffic to flow below. China was interested in it as a way of sorting out notorious traffic congestion and air pollution.

The TEB conducted its first road test run last August in the northeastern port city of Qinghuangdao, but has since mostly sat idly as a giant roadblock. Last week, the local authority announced it would remove the 300-meter tracks the bus runs on by the end of this month.

Over the weekend police in Beijing announced that it had started an investigation into the company behind the TEB for alleged illegal fundraising.

More than 30 people associated with Huaying Kailai, an online financing platform that has been selling an investment product to raise money from individual investors to develop the bus, have been held, according to coppers.

Police are working to recover funds from the firm, and advised TEB investors to report their complaints to local police stations. Huaying Kailai has disappeared and Bai Zhiming, who runs Huaying Kailai and is also chief executive of TEB Technology Development, a Beijing-based company that purchased the patent for the elevated bus, was among those arrested.

Days after the Qinghuangdao government announced the TEB track’s demolition, Bai told Chinese media that the bus would be relocated to another Chinese city.

At the time, it was launched there were those who thought the idea was as mad as a box of frogs.

Not only was it impractical it created safety risks for regular traffic. The bus’s investment offering, was sold as a private fund with a starting price of $150,000, and promised an annualised return of 12%.

At least 72 individual investors have filed lawsuits against Bai and Huaying Kailai for private lending disputes. One investor apparently called the cops claiming that Huaying Kailai and its subsidiaries had raised around $1.3 billion, which is enough to buy yourself ten Northern Irish climate-denying homophobes to prop up your government.

Last modified on 04 July 2017
Rate this item
(0 votes)
More in this category: « Foundries about to enter a golden age Kayne West quits Tidal »
back to top