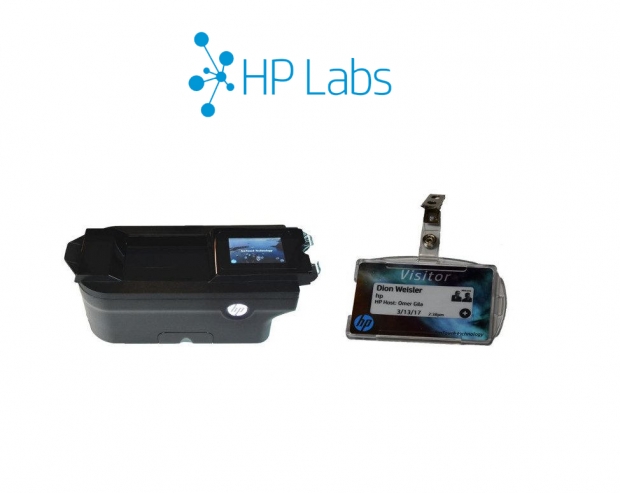 A zero-energy hybrid between digital displays and e-ink

HP Labs announced a new hybrid printing technology that is set to change the way that employee IDs, visitor passes, gate passes and other temporary passes are distributed to the general public.

For many visitor badges or guest cards, it can get burdensome for companies to print hundreds of thousands of them without wasting monumental amounts of paper and ink. HP has recognized this inefficiency and recently developed a technology called IonTouch that works as a cross between traditional printing and e-ink technology. The idea is to be able to rewrite information on plastic ID cards without having to throw them away, so they can be reused by other individuals after the credentials expire.

HP’s proprietary technology replaces the traditional printer with an IonTouch Imager, which can write and rewrite onto a 2.5-inch 300x300 pixel display up to 10,000 times. The display’s surface is capable of either black and white content or 16 levels of greyscale – not quite as advanced as color, but enough for most of HP’s use cases for employee badges, visitor passes and even hotel cards.

Using the IonTouch system, a visitor pass can be printed on the spot containing a visitor’s name and contact information, along with a photo and any context details, such as appointment times or the name of a person being visited. While e-ink and digital displays share the same functionality, they are often around the lines of $50 per card, which adds up to millions of dollars depending on a company’s requirements. HP’s rewritable displays will end up costing just a few cents to make and will fit in a size no larger than a credit card. The other benefit here is that there is no power draw to hold the rewritable content, and by switching to non-permanent ink, it is possible to include special marks or codes on each printing that prevent unauthorized duplication.

“Making cards rewriteable makes them reusable. This is good for business but also good for the environment as it eliminates millions of wasted cards every year,” says HP IonTouch lead engineer Napoleon Leoni. “Since the only way to change information on the IonTouch cards is via our IonTouch imagers, that also adds another layer of protection, making the cards very secure, too. Being able to update or rotate security codes boosts the security of credit cards and enables reuse of gift cards, replacing the scratchable or permanent security codes they use today.”

HP has not revealed any release date information about its IonTouch imager, though it says the technology can be used for financial, medical, security, hotel, retail and transportation services.

Last modified on 25 April 2017
Rate this item
(0 votes)
Tagged under
More in this category: « EFF claims Chromebooks continue to spy on kids Foxconn invests another $1.5 billion in robot development »
back to top