Tech Dirt fighting for its life 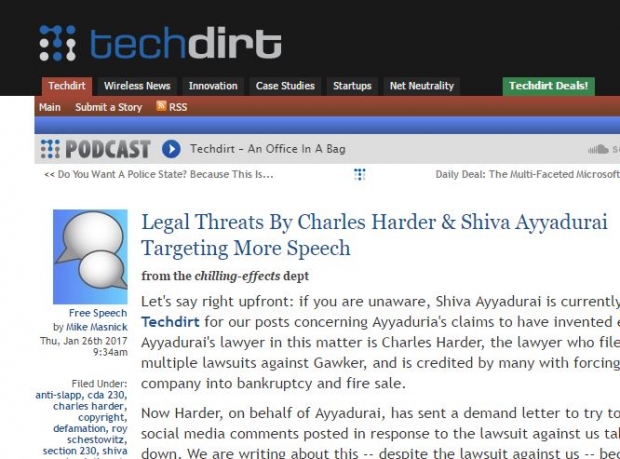 Tech Dirt is fighting for its financial life in a case which should put the fear of god into the tech press.

Last week the outfit was sued for $15 million by Shiva Ayyadurai who claims to have invented email. But it is starting to look like Ayyadurai’s case would not go ahead without the bulky wallet of Peter Theil.

For those who came in late, Thiel backed Hulk Hogan against Gizmodo’s Gawker Media which forced the company to sell off all its assets. Gawker had a lot more dosh than Tech Dirt.

Now while Shiva Ayyadurai is convinced he invented email, there are those who do not think he did.  Gawker had to back down from the case and give Ayyadurai a $750,000 settlement, resolving his defamation claims over a series of articles that, according to his lawsuit, “falsely traced the origin of email and called Ayyadurai a liar”.

He had multiple Gizmodo articles concerning his disputed claim taken down ahead of the sale of Gizmodo to Univision. Gawker also agreed to remove an article from its archive as part of the settlement.

One person who was understandably pissed off by the settlement was computer programmer Ray Tomlinson who is credited by many experts and historians with developing the technology that we understand today is email in 1971.

But Tech Dirt’s CEO Mike Masnick says this case is all about silencing independent publications for publishing opinions that public figures do not like.

He pointed out that even if it is on the right side of the war, the fight could be the end of the magazine.

“We are a truly small and independent media company. We do not have many resources. We intend to fight this baseless lawsuit because of the principles at stake, but we have no illusions about the costs. It will take a toll on us, even if we win. It will be a distraction, no matter what happens. It already has been — which may well have been part of Ayyadurai's intent.”

Gizmodo seems convinced that Thiel is funding Ayyadurai’s current lawsuit, although neither Thiel or his representatives have confirmed or denied this. Apparently, the motivation is that Tech Dirt has written some stuff that Thiel does not like. The worry is that the independent tech press, which is usually run on a shoe string, could be forced to only print news that tech companies (or rich people) want to see. Those who don’t toe the line will be easily shut down.

Last modified on 30 January 2017
Rate this item
(0 votes)
Tagged under
More in this category: « ISPs giving up on warning pirates Windows 10 Creators go mad »
back to top