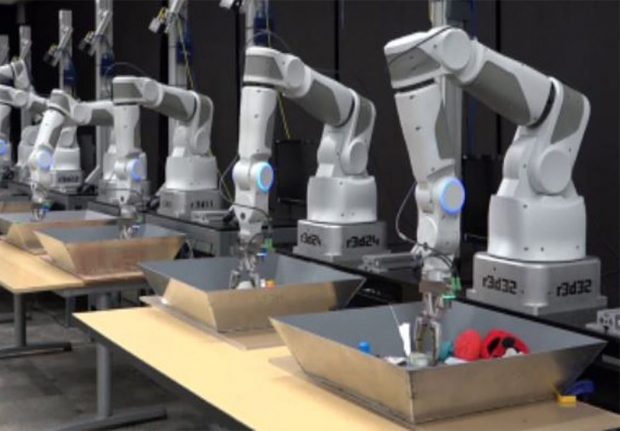 Even Mr Robot can be fired at Google

The search engine Google did some sterling work researching robotic arms for manufacturing, but abandoned the project because it had no consumer use.

Google wrote some code which lets robots  learn from one another and demonstrated its work this week. After the fleet of arms were trained on Google’s algorithms to open a certain type of door, for instance, they were able to replicate the action with doors they had never seen before.

"The skills learned by the robots are still relatively simple -- pushing objects and opening doors," the researchers wrote, "but by learning such skills more quickly and efficiently through collective learning, robots might in the future acquire richer behavioural repertoires that could eventually make it possible for them to assist us in our daily lives."

Google’s robotics group wanted to sell them to manufacturers, warehouse operators and others. But the plan was killed off because Alphabet thought it failed Chief Executive Officer Larry Page’s "toothbrush test". For those who came in late, this is a requirement that the company only ships products used daily by billions of people.

James Kuffner, chief technology officer at the Toyota Research Institute who previously led Google’s robotics unit, said the arm was still a prototype, but it had a lot of advantages.

Google spokesman Jason Freidenfelds said there are no plans to sell the machines. "We’re using them to do basic research on how machine learning might help robots be a bit more coordinated -- a promising field of research, but still very early days."

According to Bloomberg, Google built around 50 of the robotic arms capable of lifting about 10 pounds each, according to one person familiar with the project.

People inside the robotics division pushed to release the machines at a relatively low price, undercutting other entrants in the small but growing market for light, collaborative robots.

The move is being seen as Google being rudderless about its robotics division. It bought a several startups in 2013. Earlier this year, Google tried to flog Boston Dynamics, after tensions arose internally but could not find a buyer.

Last modified on 07 October 2016
Rate this item
(0 votes)
Tagged under
More in this category: « Microsoft won't service Intel Cannonlake or Coffeelake for long Sony goes flat out on imaging sensors »
back to top