Thunderbolt SSD could be the next big thing 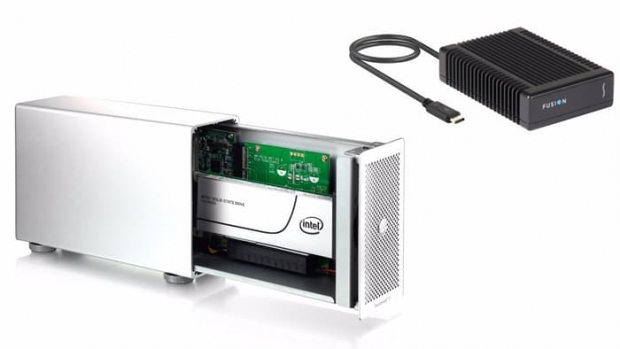 As UHD tellies promise that huge amounts of data will need to be shifted the question of how to do it fast enough is being answered by a new generation of SSDs based around Thunderbolt.

This week two new drives were announded. One by Sonnet and the other by Akitio  and both combine Thunderbolt 3 and the latest PCIe SSD technology.

The 512 GB storage unit is compatible with Windows 7 and 10 machines, and features the latest PCIe Gen 3 flash memory technology and a 40 Gbps Thunderbolt 3 interface on the end of an included 0.5 m (1.6) cable. Sonnet claims it can manage data transfer speeds of up to 2,100 MB/s.

The Akitio drive is housed in an aluminum enclosure, comes with a 40 Gbps cable included and is compatible with Windows 7 or newer computers. It can also be daisy chained to up to six other units.

Rate this item
(11 votes)
Tagged under
More in this category: « EU hits Google with Android monopoly charges TSMC will launch 7nm production trial in 1H 2017 »
back to top