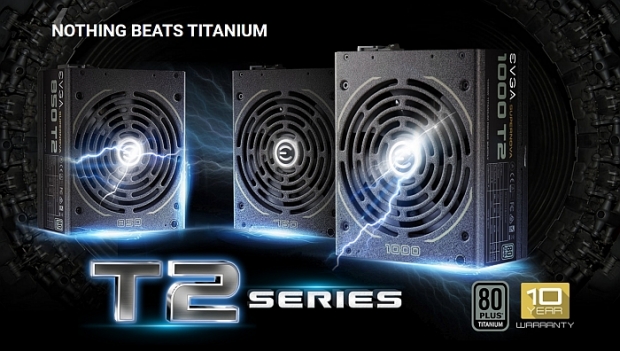 In addition to product showcased at CES 2016 show in Las Vegas, EVGA has now announced its three new power supply units that will be a part of its SuperNOVA T2 series and feature 80 PLUS Titanium efficiency rating.

EVGA has just taken the wraps off three new enthusiast-grade power supplies in its flagship SuperNOVA T2 Series. These power supplies represent the highest grade of energy efficiency at a stunning 94 percent, along with an "ECO mode" to deliver zero fan noise during low to medium-load operations.

Over the past twelve years, computer PSU manufacturers have used 80 Plus, a voluntary certification program intended to promote energy efficiency in power supply units. 80 Plus, 80 Plus Bronze, 80 Plus Silver and 80 Plus Gold were the four main standards that consumers had to choose from up until 2009, when Ecos Consulting added an even higher, 80 Plus Platinum rating to its program. Three years later in 2012, Dell and Delta Electronics became the first partners to create an 80 Plus Titanium rated power supply, but unfortunately for consumers their version was only meant for servers.

Last year, EVGA surprised enthusiast crowds by being first-to-market (for consumers at least) with an 80 Plus Titanium rating on its flagship SuperNOVA 1600 T2 unit. The company is now bringing the same 80 Plus Titanium rating to three more models with a stunning 90 percent energy efficiency at full load and 94 percent energy effiency at half load.

Last modified on 13 January 2016
Rate this item
(5 votes)
Tagged under
More in this category: « EVGA shows off prototype full tower ATX gaming case at CES 2016 Researchers develop a lithium-ion battery which does not explode »
back to top