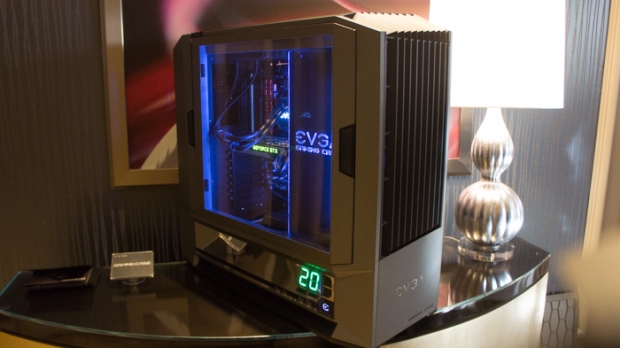 Up to 6 degrees cooler than other cases, plenty of headroom for radiators

EVGA had quite a few products on showcase at CES 2016 and one of them was a new full tower ATX gaming case prototype focused on GPU and liquid cooling.

We have just returned from CES 2016 last week in Las Vegas where we were able to stop by EVGA’s suite at the Bellagio Hotel and check out the company’s product plans for 2016. We have already written about the new EVGA gaming notebook that is set to be released very soon along with the Geforce GTX 980 VR Edition, but what also caught our eye is the new full tower ATX gaming case prototype that is set to be released by the end of Q2 2016. 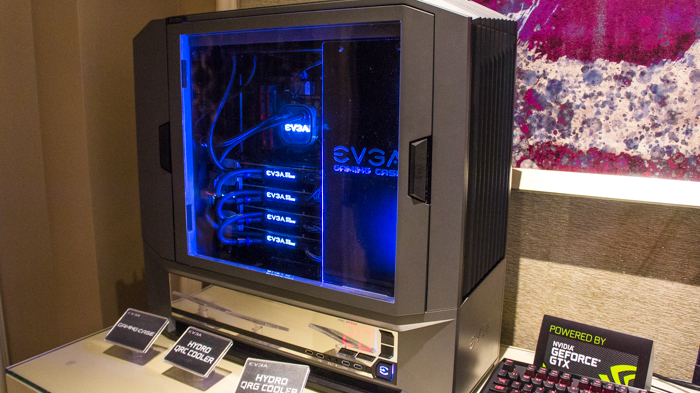 From an initial glance, airflow is the number one priority of this full tower ATX case design and we can spot several areas where this is readily apparent. The front of the case is completely driveless and houses three 120mm intake fans with plenty of room for a vertically-mounted 360mm radiator. It appears that the company has decided more users will opt to install a performance cooling solution in this area rather than optical drives and any front panel accessories. 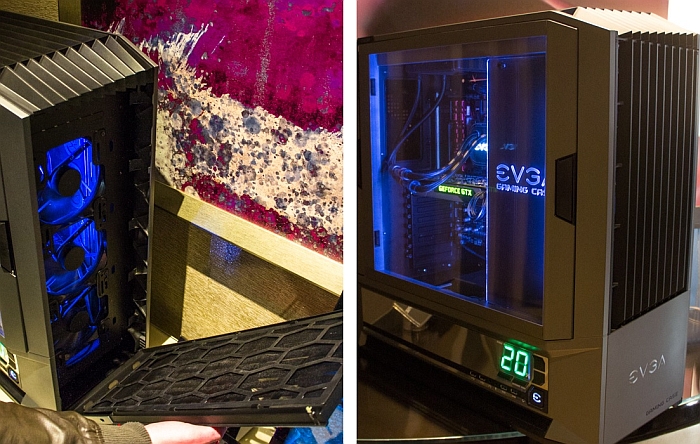 Fear not, however. The back of the case has space for eight 5.25-inch drive bays and six 2.5-inch drives (thanks PCPerspective for getting a picture of the back panel)

Also of note are the long black fins running along the front panel and top of the case. EVGA has said this design allows the case to run up to 6 degrees cooler than in traditional cases, according to the company’s internal testing. 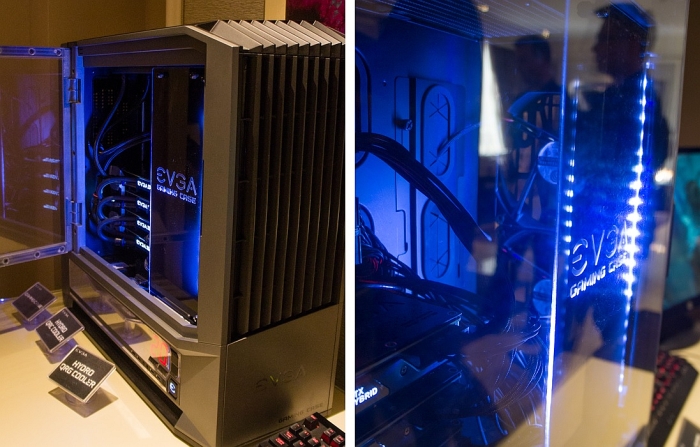 The side panel comes with a large, squared sleek glass door allowing a full-spectrum view of all internal system components. 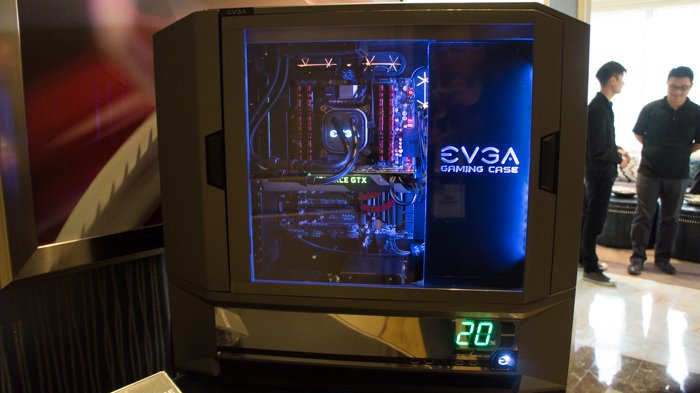 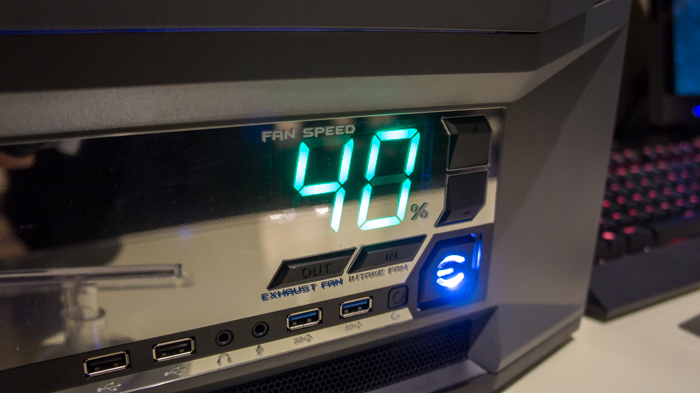 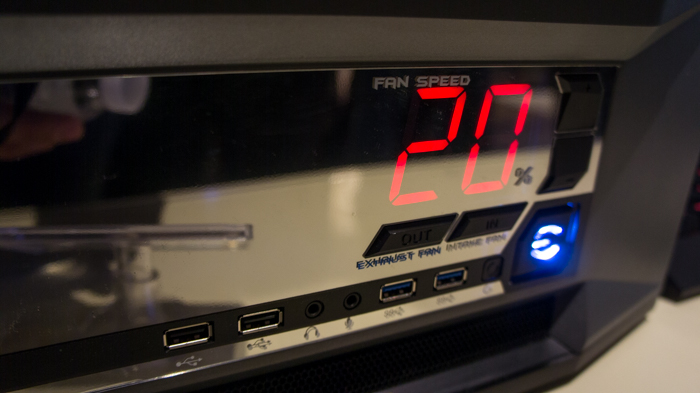 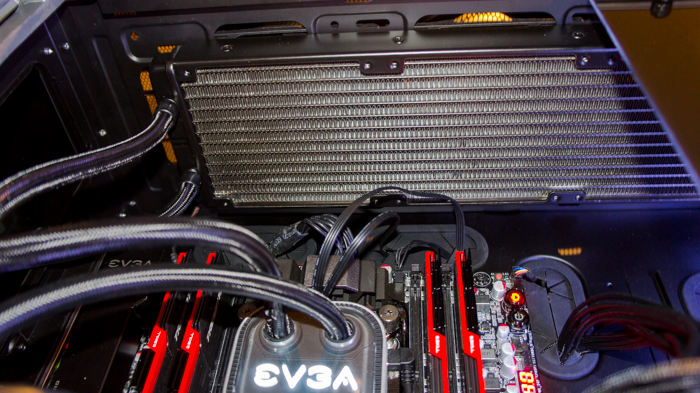 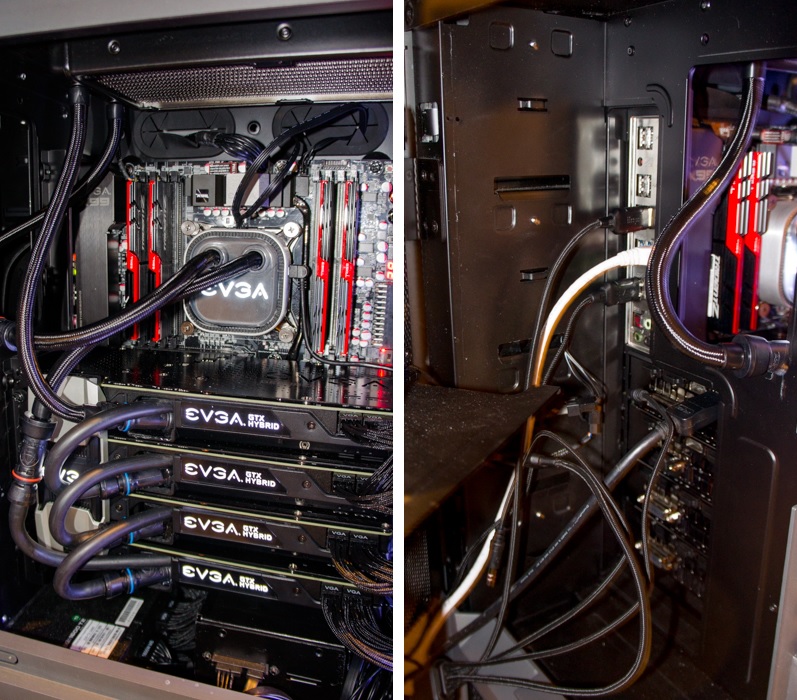 The back of the case sports two 120mm exhaust fans and a hinged door design to conceal system connector cables.

The company will offer different versions of the case ranging from $79 to $299, depending on features. Also of note is that the $299 version will upgrade the LCD fan speed controller to a touchscreen display that can interact with EVGA Precision X software. Since this is an early prototype, we also suggested that they offer the case in different color schemes, including black, grey and white for starters. The representative we spoke with took these suggestions into consideration as the development team works on finalizing the product lineup.

We can only hope that more color options will help EVGA’s entry into a full-tower ATX case market dominated by Lian-Li, CaseLabs, SilverStone, Cooler Master, Corsair, Fractal Design and others.