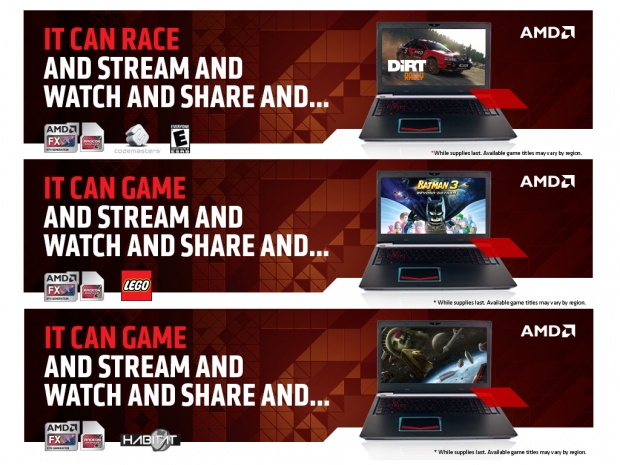 For certain CPUs and APUs in notebooks and desktops

AMD has released a new game promotion that offers one free game with certain AMD APUs and CPUs, including A10-, A8- and A6-series APUs, as well as AMD FX APUs and CPUs in certain notebooks and desktops.

Depending on the APU or CPU, AMD offers a choice of a single game from the list. The AMD A10-series APUs and AMD FX APUs and CPUs in notebooks and desktop will be able to choose a game from the list that includes DiRT Rally, LEGO Batman 3: Beyond Gotham, Tomb Raider, Space Run, Habitat, Tales from Space: Mutant Blobs Attack, Guacamelee and Sonic & All-Stars Racing Transformed.

Those that buy AMD A8-series APU in desktop and notebook systems will be able to choose a single game from a smilar list, which lacks titles like DiRT Rally, Tomb Raider and Space Run.

AMD A6-series APU-based notebook and desktop buyers will be able to choose a single game from the list that includes Tales from Space: Mutant Blobs Attack, Guacamelee and Sonic & All-Stars Racing Transformed.

The new If It Can Game bundle is apparently only available in select countries, limited to certain retailer/e-tailers and will be running only until the supply of key codes lasts.

You can check out more details regarding the promotion at AMD's dedicated game promotion site. 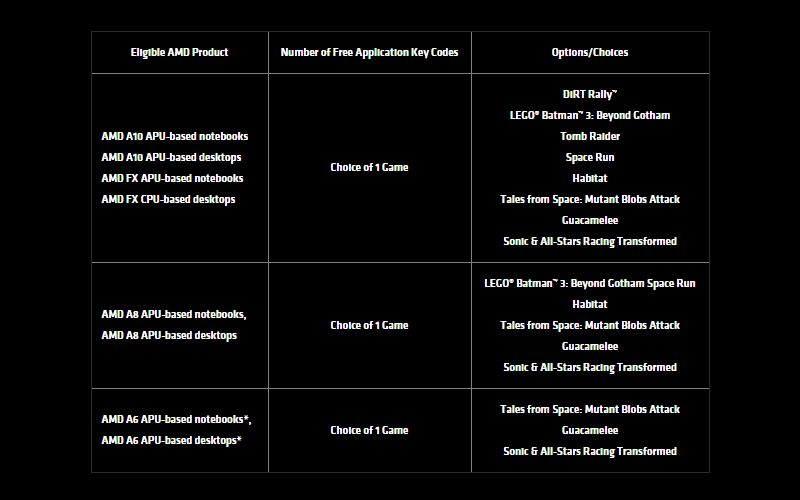