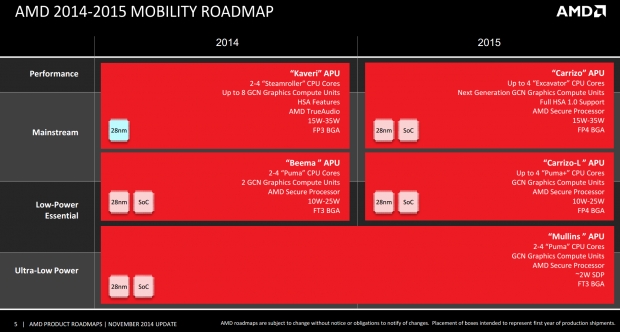 AMD officially unveiled the Carrizo-L product SKUs and clock speeds and ended months of speculation on what the company's 2015 low-power products might look like.

Carrizo-L chips are 28nm product and shares the same socket with Carrizo.

It is not clear if AMD's APU will match Intel's Atom until Cherry Trail and the A10-7410 are in the shops.

So far AMD never tried to compete with Atom but looked at giving better performance for higher end parts. This is why we saw netbooks powered by single-core Atom CPUs with graphics only an Intel Press Officer could love.

Carrizo-L will use significantly more power than Intel's Atom, though higher performance in many areas.

There is no information on graphics performance, but the 128 GCN cores and be better anything Chipzilla has. .

Puma+ will be the last SoC based on the Bobcat CPU architecture and it will be replaced by AMD's Zen.

AMD focused on Carrizo for the improvements it made to execution efficiency rather than anything cutting edge.

Rate this item
(8 votes)
Tagged under
More in this category: « Wistron reports huge notebook shipments DRAM market picking up »
back to top