A new USB plug is being finalised which means that at last it can be plugged into a device whatever way up the device is facing. The USB Type-C will supporting faster data transfers and more power and will still be the same size as the current USB 2.0 Micro-B plug.

It was the rise of the mobile device which sparked the move. Many users think they have put in the wrong plug when they just have the right one the wrong way up. The new standard plug can deliver up to 3A for standard cables, and up to 5A for connectors, which should add up to faster charging with compatible devices; in fact, up to 100W is potentially possible. Data rates of up to 10Gbps are supported.

The goal is to make a single cable and connector that works across platforms and devices, rather than have a range of sizes as has been the case previously with regular, mini, and micro USB among others. The improvements in data rate and power also opens the door to a new type of hub.

That, the USB-IF group behind the standard suggests, could have a single USB Type-C connection that powers and recharges your laptop. Of course it is not backward compatible with existing USB connections, though the USB-IF says that passive adapters will allow for semi-straightforward use.

In any case, get used to it. We will probably be using Type-C plugs for many years to come. 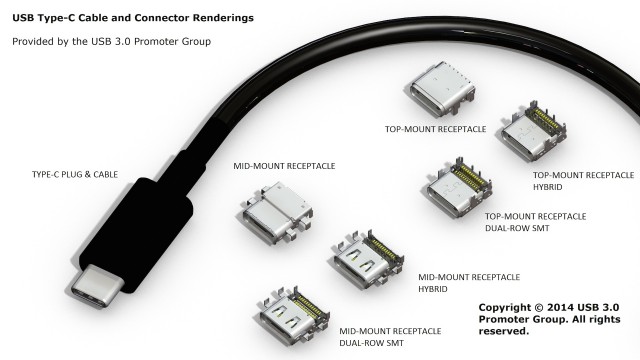 Rate this item
(0 votes)
Tagged under
More in this category: « OpenSSL flaw exposes the Internet Samsung set to post record earnings »
back to top