No word on specs

We must admit we’re fans of Zotac’s Zbox line-up, as the diminutive boxes tend to offer somewhat better value than most mini PCs, yet they are quieter than much of the competition. That is why we have high hopes for Zotac’s Steam Machines, but the first official announcement has left us baffled.

Zotac shot off a press release which states that its first Steam Machine will have a suggested retail price of $599, but that’s about it. There is absolutely no about the actual spec. All we know right now is that it will have an Intel CPU and Nvidia graphics.

The price indicates that the Zbox Steam Machine is aimed at the lower end of the spectrum, as most Steam Machines are expected to cost a few hundred more. There is still no word on an AMD version, although we think it could be on the way. Zotac has a habit of offering a wide variety of chips in Zbox rigs and right now you can buy units based on AMD Kabini and Brazos parts, along with Intel rigs based on Ivy Bridge and Haswell parts, along with VIA processors. Zotac might be an Nvidia AIB partner, but when it comes to Zbox rigs it loves AMD. It was one of the first vendors to offer Kabini based mini PCs and they had a habit of wiping the floor with Atom systems of the day.

The design is more or less standard, it looks like a 2010 Zbox with a coat of black paint. There is nothing wrong with the design though, although we still find the placement of both audio connectors at the front somewhat problematic. There are still plenty of people with old audio systems that would like to connect them without having to look at ugly cables sticking out of their tiny PCs. 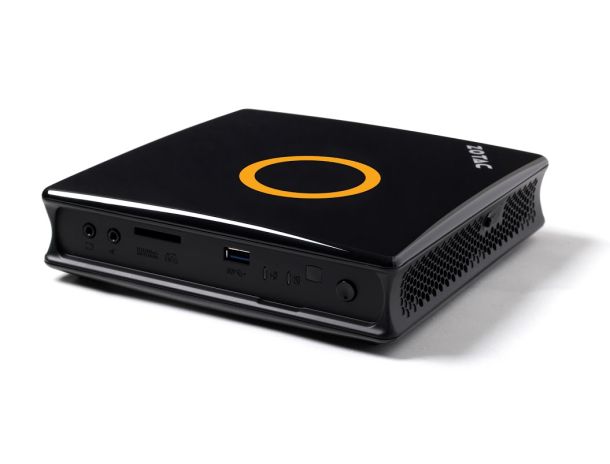 Rate this item
(0 votes)
Tagged under
More in this category: « US finds it hard to complain about Chinese hackers Michael Dell gets thumbs up for buy-out »
back to top