According to unnamed sources close to the folks at 9-to-5 Mac, it appears that Apple's software engineers have been very busy working on the next major release of its infamously popular (and rather forced) iTunes software for Windows and Mac OS X. The sources claim that Apple has recently begun seeding the software platform's next major release, iTunes 11, and work began prior to the release of iTunes 10.6 which became publicly available on Wednesday, March 7th (see: the announcement date of the third-generation iPad) 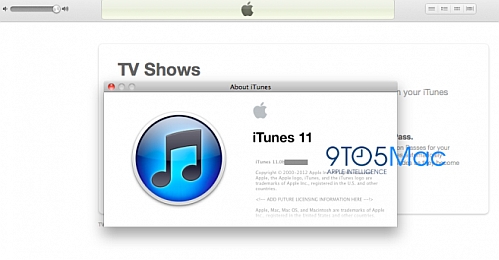 Nevertheless, iTunes 11 is heavily focused on under-the-hood changes, rather than cosmetic ones as with successive iterations of iTunes 10. Support for the company's upcoming iOS 6 mobile operating system, an increased presence of iCloud integration and a revamped App Store are all expected to be major focal points with this release.

Of course, Apple may not intend to release a finalized iTunes 11 public build for mass consumption until Fall comes around, when it will be launching its sixth-generation 4G LTE iPhone and fifth-generation iPod touch devices. However, the anonymous sources claim it is most probable that the company will release a couple more iTunes 10.x updates and a simple iOS 6-compatibility release for developers this summer.

In regards to enhanced iCloud support, it is expected that iTunes 11 will feature a dedicated iCloud control panel that will allow for direct management of iTunes-in-the-Cloud content and device backups made to Apple's iCloud servers in Maiden, North Carolina (codenamed "Area i51").

Last modified on 11 April 2012
Rate this item
(0 votes)
Tagged under
More in this category: « Raspberry Pi gets CE certification TSMC constructs second 12-inch fab for 20nm wafers »
back to top