Apple's third-gen iPad accounts for 10% of all iPad traffic

Apple's third-generation iPad, which was announced on March 7th and released on March 16th, has been on the market a little less than a month and managed to find itself in the hands of over 3 million consumers just on launch-day weekend.

Yet according to a new report published by Chitika, a major online ad network and data analytics firm, the company's third-generation iPad has literally made leaps and bounds since launch-day weekend and is now in the hands of tens of millions of consumers across the world. Just over two weeks ago, Chitika reported the device's U.S. internet traffic presence at around 6.6-percent. As of April 9th, however, the company's iPad Tracker shows that the device now accounts for 10-percent of all iPad traffic across its network, peaking at a whopping 16.2-percent on Easter Sunday, April 8th. 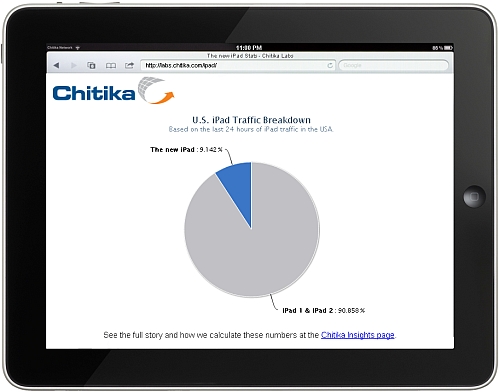 “The 10% threshold is much more than an indicator of adoption; symbolic meaning cannot be dismissed,” Chitika’s Gabe Donnini wrote in a post on the company’s blog. The company also reports that Apple's third-gen iPad surpassed the iPad 2's adoption rate after only four days on the market, while steadily gaining share on a daily basis from here on out. While analysts predict this increase is likely attributed to early adopters and die-hard Apple enthusiasts, they are more impressed about the device's sustained growth patterns in marketshare since its release on March 16th.

Meanwhile, here is the device's adoption by U.S. states, with California evidently taking the lead at 11.5-percent.

Last modified on 10 April 2012
Rate this item
(0 votes)
Tagged under
More in this category: « Facebook acquires Instagram for $1 billion Iran could unplug internet, launch halal version instead »
back to top