As the information technology world is well aware of by now, Apple's highly anticipated third-generation iPad goes on sale this Friday, March 16, 2012 and is expected to cause quite a stir in the usual upheaval of daily tech talk, ultimately due to the ridiculous prevalence of the world's most notorious trolls, fanboys and shrinks. Of course, we always look forward to Apple launches as they bring Wall Street's numbers higher each and every year, but remain skeptically optimistic about the satisfaction to be had after dealing with said trolls. 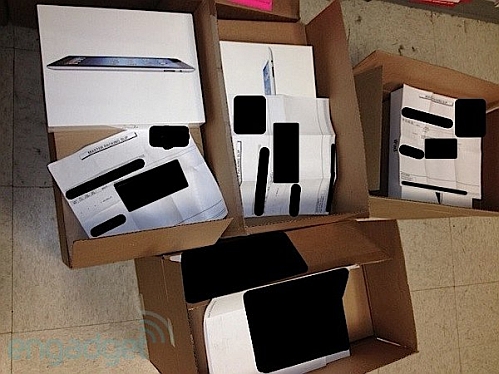 Nevertheless, it appears that Apple has yet again chosen a very minimalist packaging design for its third-generation tablet. Based on some images leaked from an unspecified BestBuy's backroom inventory, the white boxes feature a picture of the device on the top cover and the word "iPad" on the left side.

Of course, Apple's online store has already sold out of its launch-day shipment stock for home delivery, and any orders placed now have been scheduled to be shipped out on Monday, March 19th. Nevertheless, we expect a variety of different people and faces from all walks of life will be camping out at their local Apple, AT&T and Verizon stores for the fruit-themed toymaker's latest innovation come this Friday.

Last modified on 14 March 2012
Rate this item
(0 votes)
Tagged under
More in this category: « WD ups the ante in 2.5-inch market HTC rolls out Android 4.0 ICS updates for 16 smartphones »
back to top