Next Wednesday, 10:00am PDT in San Francisco

Apple's highly-anticipated third generation iPad, which has yet to receive an official name and confirmation of various rumored hardware specifications (see: 2048x1536 Retina Display, LTE radio, Apple A5x SoC details), is finally getting its official announcement on Wednesday, March 7, 2012 at the Yerba Buena Center for the Arts in San Francisco. 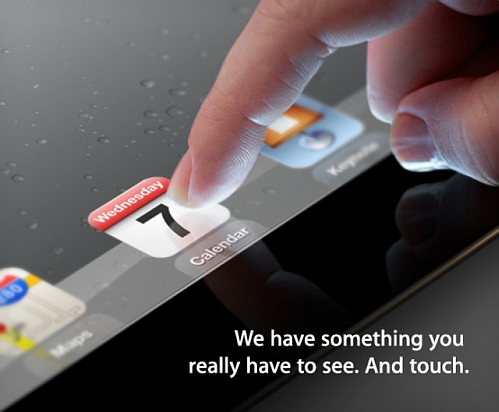 The event flyers were handed out to select members of the press just a few hours ago with the headline: "We have something you really have to see. And touch." Nevertheless, the event will be held at 10:00am Pacific Time and analysts are expecting the company to announce a few products other than the third-generation iPad. For instance, Apple has reportedly had an upgraded Apple TV set-top-box in the making for quite some time, and it has also been reported that the company could demonstrate a new high-definition audio format with "adaptive streaming" related to its iCloud and iTunes Match services.

We will have more confirmed details and hard empirical evidence of the elusive third-generation tablet in just a week's time from now, save for an extra leap-day in between on February 29th.

Last modified on 28 February 2012
Rate this item
(0 votes)
Tagged under
More in this category: « Third-gen iPad confirmed slightly thicker than iPad 2 Verizon's "shared data plans" on track for summer 2012 »
back to top