Since Friday, March 11, 2011 – the launch date of the Apple iPad 2 – many functionality enthusiasts have been eagerly awaiting an untethered jailbreak to arrive from the iOS development scene for Apple’s latest A5-based devices. That date was nearly ten months ago, or roughly the equivalent to a decade’s worth of patience in “Internet time.”

Apple proceeded to launch the iPhone 4S in October 2011, another A5 device that was resilient to the forces of the iOS dev scene and showed no mercy for baseband and hardware exploits. Yet it wasn’t without months of trial and error that the hard work from the iPhone Dev Team and Chronic Dev Teams managed to package an untethered jailbreak for Apple’s A4 devices (iPhone 4, iPad 1, iPod touch), while passing off work on A5 devices to iOS security researcher pod2g.

Following the release of the anticipated A4-based untethered jailbreak, pod2g wrote a very informative blog post explaining the details of how the iOS 5.0.1 jailbreak works. Dubbed project “Corona,” he explains that Apple fixed all previous known ways of executing “unsigned” binary code in iOS 5.0 and had to look for other ways to deliver the untethered jailbreak. 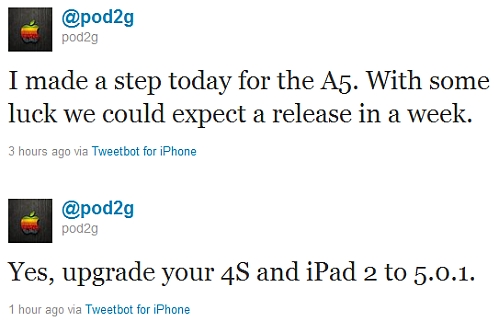 Nevertheless, pod2g has recently tweeted that we can expect the A5-based untethered jailbreak within a week’s time. Of course, there is no guarantee at this point, but we can only hope that final testing of the Corona package is successful and stable enough for a public release. In the meantime, iPad 2 and iPhone 4S users should ensure that their devices are running iOS 5.0.1 in preparation for the untethered jailbreak.