The AMD Amur could be the company's first ARM-based processor for consumer oriented products. The codename was leaked late last year, but apart from the name we did not know anything about the spec.

The Amur's positioning in AMD roadmaps suggested a successor to Beema/Mullins, but now it appears that it is an all new product class based on ARM rather than x86.

According to Digitimes, Amur is a heterogeneous system architecture (HSA) part and it is designed specifically for Android tablets. It is based on ARM's new Cortex-A57 core, just like AMD's Opteron A1100 server part.

Amur will be capable of running Android and Linux. The company is said to be testing the processor, but it is still unclear when the chip will launch. 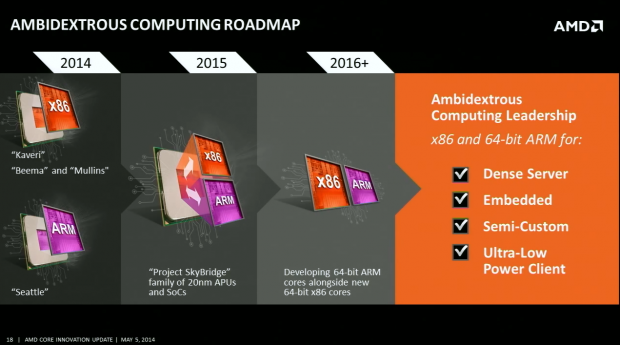 The roadmap doesn't offer much in way of specifics. It merely describes AMD's Project SkyBridge as a "family of 20nm APUs and SoCs," based on x86 (Nolan) and ARM architectures. Amur is part of AMD's ambidextrous computing roadmap, which is supposed to be reserved for embedded, dense server, custom and ultra-low power client markets.

Is Amur going after Tegra?

SkyBridge parts will be manufactured in 20nm, which means they could be produced by GlobalFoundries or TSMC, although we would put our money on the latter. The chips are designed for full HSA support with AMD Graphics Core Next (GCN) graphics in tow.
Nolan and Amur are expected to launch in the third quarter of 2015, although this is not something we were able to confirm at this point. 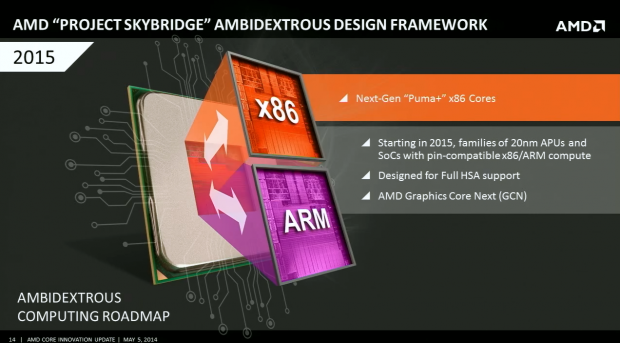 So far AMD has steered clear of consumer ARM chips, but Amur appears to be just that - an ARM tablet chip with CGN compute potential on the side. It sounds a bit like Nvidia's Tegra, although it should be noted that Nvidia uses a custom ARM core in its first 64-bit Tegra part, which should launch soon. In theory, different Amur designs could target micro-servers and consumer products like tablets.

If AMD decides to go after tablets, a year from now the company could challenge Nvidia's second generation 64-bit APU, codenamed Erista, with Amur products. Nvidia plans to use Maxwell graphics on the Erista, while AMD also appears to be using its cutting-edge GCN graphics for Amur. We still do not know what sort of processor cores Nvidia plans to use in Erista, as it could use an off-the-shelf ARMv8 64-bit core like the Cortex-A57, or a custom core like Denver - or both.

Oh, and in case you were wondering, Amur is the world's tenth longest river. It forms the border between China and Russia and it was the site of the Sino-Soviet border clash of 1969, which allowed the Chinese to capture a brand new T-62 MBT and use it as inspiration for a series of their own tank designs. (Another Cold War history lesson? Ed)