Intel has officially launched the new Z97 and H97 chipsets, just in time for the Haswell refresh rollout. To be honest, the chipsets were no secret to begin with, as listings of 9-series boards started appearing a couple of weeks ago.

Intel is not making much of a fuss about Haswell refresh and the new 9-series platform. Haswell refresh is basically a clock bump, so there is really not much to talk about. However, the new chipsets bring a few new features to the table.

The H97 and Z97 feature support for M.2 storage, which can deliver transfer speeds of up to 1GB/s, at least in theory. SATA Express support is on board, too. 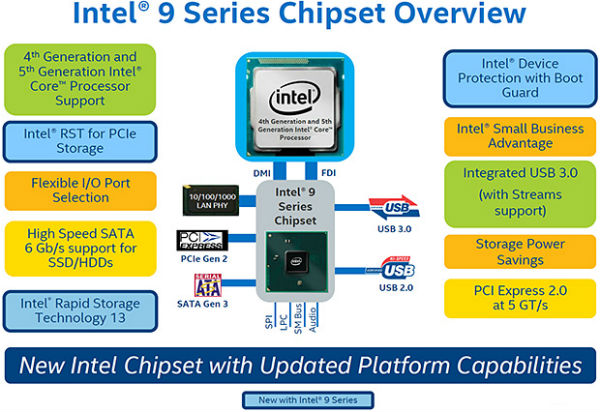 In case you’re on a tight budget or simply need a lot of cheap, mechanical storage, the chipsets support Smart Response Technology on hybrid drives. Intel has been playing around with the idea of small, cache SSDs for years, but now SRT support has expanded to hybrids. In the past users needed a dedicated SSD and a hard drive on the side, but now a single hybrid drive is enough.

Two out of eight PCI Express lanes can be dedicated to SSDs and they can act as a boot device.

Haswell refresh is not much of an upgrade, but Devil’s Canyon is a bit more interesting. Broadwell won’t show up this year, at least not in the desktop space. Intel’s new chipsets support Devil’s Canyon and Broadwell parts, so they should be future proof. This is perhaps Intel’s biggest selling point. Devil’s Canyon is of course designed for the LGA1150 socket and the first Broadwell variants will use the same socket, too.

The only problem is that we will not see low-end variants of new 9-series chipsets. The Z97 and H97 are designed for high-end and mid-range rigs. Intel is expected to roll out a new high-end chipset for Haswell-E parts, but that’s about it.

Rate this item
(0 votes)
Tagged under
More in this category: « Asus 890GX board listed in Europe Calpella to get replaced by Huron River in 2011 »
back to top