Intel has formally announced a few upcoming products in its latest desktop roadmap and a number of them should appeal to proper enthusiasts.

Haswell-E leads the way, eight CPU cores backed by the new X99 chipset and DDR4. Intel points out that Haswell-E is the "first 8-core desktop processor" and also the first desktop platform to employ DDR4 memory. There is still not a lot of info on it, but the behemoth should launch in the second half of the year. Sadly, Intel's Extreme edition tends to be quite pricey and it's usually reserved for professionals and enthusiasts with really, really deep pockets.

Devil's Canyon sounds like an interesting compromise, as it won't end up as expensive as Haswell-E parts. Devil's Canyon is not exactly a new product, or the name of a chip for that matter. It is an improved Haswell with improved packaging materials. Intel says it was "re-engineered for enhanced performance and overclocking," so it basically sounds like a Haswell refresh in fancy packaging. There is nothing wrong with that, in fact we like the idea. It's a tweaked, unlocked Haswell for enthusiasts on a budget - let's just hope it ends up priced right. 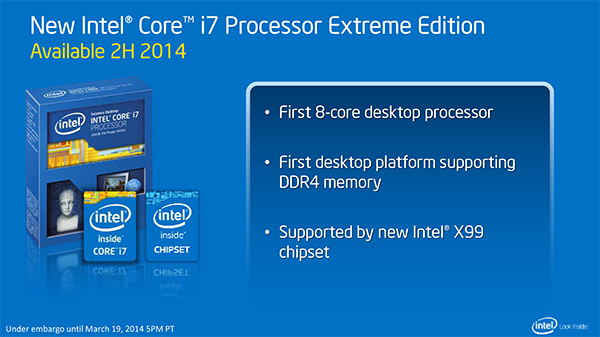 So what about Broadwell? Intel did not say much, which is not surprising as the new 14nm architecture will be reserved for mobile parts. The fist Broadwell desktop chips will probably appear next year. Intel says they will be unlocked and feature Iris Pro graphics, but other than that there is no info. And no, Intel is not killing off socketed chips, at least not for the time being.

Intel did not say much about the new X99 chipset, either. However, Tom's Hardware says it will feature integrated clock generation and ten SATA ports.

In addition to enthusiast parts, Intel also announced the Pentium Anniversary Edition, an unlocked series of Pentium chips based on Haswell Refresh silicon. Yes, it's 20 years since the Pentium launched - we're getting old. The original Pentium happened to feature a rather nasty FPU bug, but it was quickly sorted out and Pentium arguably became Intel's biggest brand ever, although at the time there were plenty of punters who criticised Intel from ditching its x86 naming scheme. Perhaps Intel should have chosen a different name for Pentium Anniversary Edition parts, as 586 would really be a blast from the past.

Intel also talked NUC and other emerging desktop form factors. The company has a portable all-in-one dubbed Black Brook and it's not giving up on the NUC concept, either. Intel wants to make these frugal PCs faster and more responsive, while at the same time cutting power consumption and eliminating a lot of bulk.

Rate this item
(0 votes)
Tagged under
More in this category: « MediaTek says it's better than Qualcomm AMD's AM1 rollout picking up speed »
back to top