A new mystery Nvidia tablet has breifly appeared on the GFXBench website earlier this week and although it was pulled down some screenshots were made.

Although named as the Nvidia Mocha, this could easily be the Tegra Note 8 as we already heard that Nvidia will go for an eight inch tablet next. Nevertheless, the listed tablet features a Tagra K1 chips clocked at 2.1GHz, a 7.9-inch touch screen with 2048x1536 resolution, 2GB of memory (1.7GB listed), 16GB of storage, front 5-megapixel and 7-megapixe rear camera and it is running on Android 4.4.2 Kitkat OS.

Nvidia apparently managed to sell quite a few original Tegra Note tablets with Tegra 4 SoC and some can still be found available for around US $190.

Hopefully we will soon hear more about this new Nvidia tablet. (via Techreport.com.) 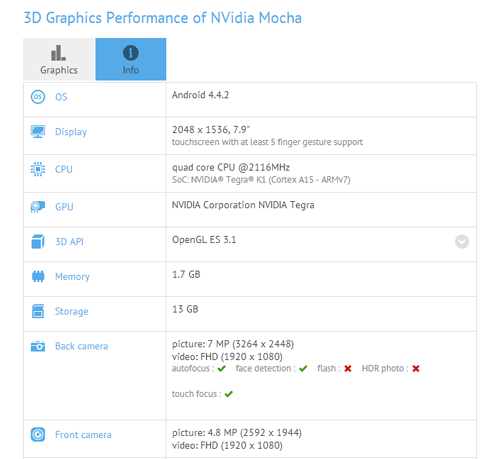