Much lower power compared to Kepler

From what we heard the new Maxwell based graphics cards are coming in Q1 2014 and shipping in the same quarter. Multiple sources have confirmed that there will be Maxwell based cards in retail and etail before the end of March 2014. This is quite big news for GPU lovers, as Maxwell should be much more power efficient than Kepler. According to Nvidia’s roadmap it is supposed to have four times the Dual Precision Gflops per watt compared to Kepler. According to the same roadmap Maxwell has been pushed from 2013 to 2014 which implies a slight delay from the original plan. 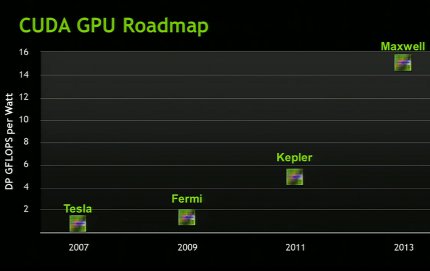 Our multiple sources do agree on the Q1 2014 shipping to customers timeframe, but they are not aware if this is another 28nm or first 20nm graphics chip to hit the market. We can only speculate as we don’t know for sure at this point.

GPU performance lovers as well as Tesla compute performance enthusiasts will like this core as it can offer much more performance per watt than any previous generation including Kepler. The question remains if Nvidia plans to officially introduce this card before March 24 2014, the first day of its GPU technology conference, of if the launch happens a bit earlier. In case Nvidia wants to ship cards to customers, that will have to mean that it has the production right now, as it takes time to ramp these chips to decent yields. We are thrilled as it promises another eventful and competitive year in the PC GPU arena and we are quite sure that AMD is not sleeping.

From what our sources can confirm, Maxwell ships to customers in the form of retail graphics cards by the end of March.