It looks like that tablet market is not Vizio's only focus, as the company revealed two smartphones at the CES 2013 as well, a 5-inch 1080p phablet and a 4.7-inch 720p smartphone.

The 5-inch 1080p Vizio phablet uses an unsepcified dual-core Qualcomm processor clocked at 1.5GHz paired up with 2GB of memory, while the 4.7-inch 720p smartphone uses a dual-core MediaTek chipset clocked at 1.2GHz and paried up with 1GB of RAM. Both feature stock Android Jelly Bean OS and have an impressively good "laminated" screens. The 4.7-inch smartphone also has dual-sim slots and microSD card slot.

Unfortunately, according to The Verge, these are currently only planned for Chinese market. Future plans are to generate enough sales in China in order to put Vizio in better position for bargaining with US carriers.

At least it is nice to know that they are trying and these two handsets are a pretty impressive attempt to crack the smartphone market.

You can check out a hands-on over at TheVerge.com. 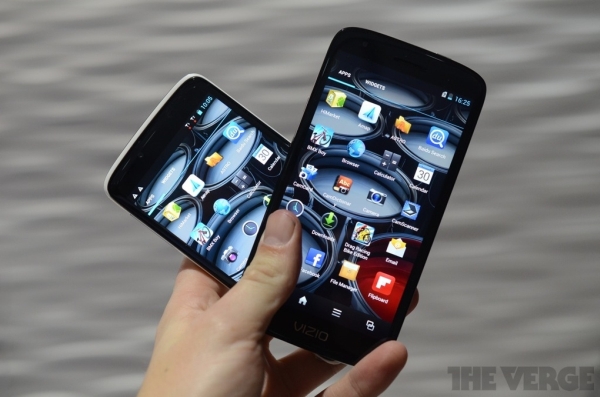 Last modified on 08 January 2013
Rate this item
(0 votes)
Tagged under
More in this category: « HTC posts dismal earnings Apple said to be working on cheaper, plastic iPhone »
back to top