We were rather surprised to get an email from Thomson, the outfit responsible for cable modems used by namy European ISPs. It seems the modem specialists are now getting into phone business. They mean serious business at least with the screen size as they want to go against Samsung’s Galaxy Note with its 5.3-inch phone.

The processor behind this rather big phone is MT6570 at 1GHz powered by Adreno 220 GPU and we could not even find the origin of the CPU. It doesn’t sound like a dual core, which could potentially mean it’s underpowered for such a large phone. It’s a 3G phone.
And it comes with a 2450mAh battery and 5-megapixel camera. However, 480x800 video support definitely is not the latest greatest you would want from a big phone.

The phone does come with Ice Cream Sandwich Android 4.0 powered by GO Launcher user interface that should make things better. Frankly, the only good thing about this phone is the support for two SIM cards, something that some people might appreciate. 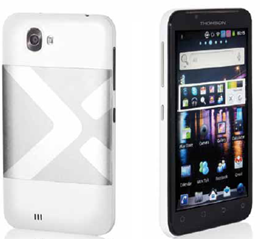 Rate this item
(0 votes)
More in this category: « Sony’s new Xperia leaked and reviewed ahead of launch Samsung’s first Windows Phone 8 devices leaked »
back to top