Although the already announced higher-end Mali-T604 and Mali-T658 have yet to appear in any device, ARM has now announced yet another Mali GPU, the Mali-450 MP. Doubling the amount of cores compared to the good old Mali-400 MP GPU as well as doubling the vertex processing throughput, the Mali-450 MP should bring the best posible per core perfomance for smart TVs, smartphones and tablet devices.

Spec wise, the Mali-450 MP GPU can be configured with up to eight cores with 8KB of L2 cache per core. The reference quad-core Mali-450 GPU has a 8.6mm2 die area with 256kB of L2 cache with each core working at either 240MHz in 40nm LP or at 480MHz in 40nm GP version and offers throughput of 104M triangles/s with 3.8G pixels/s at 480MHz. According to ARM, the Mali-450 MP takes performance density to new level and it is optimized with focus on energy and bandwidth savings that should result in lower cost of manufacturing and minimal energy consumption, while providing improved performance and vertex processing throughput.

The Mali-450 MP supports 4xAA anti-aliasing with virutally no performance drop and 16xAA as well that outperforms all implementations of comparable quality, according to ARM. It also feature OpenGL ES 1.1/2.0 and OpenVG 1.1 APIs.

The Mali-450 MP is software compatible with Mali-300 and Mali-400 MP which should enable easy implementation. 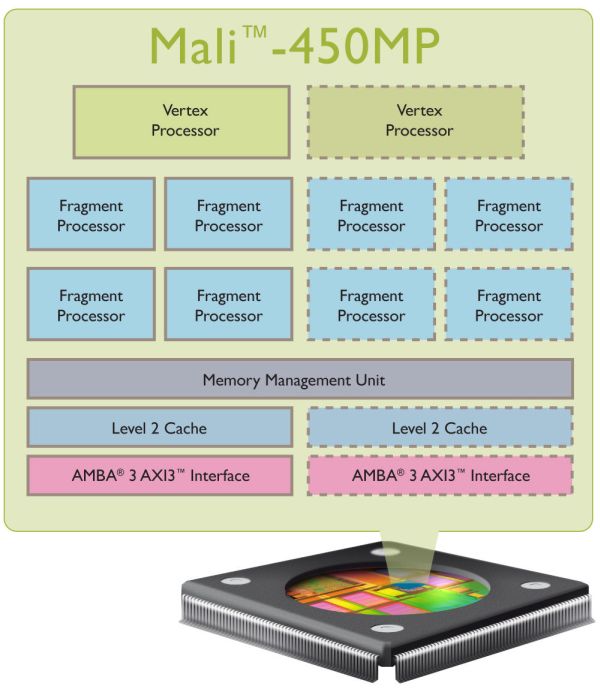