In case you forgot, Radeon HD 7970 is AMD’s fastest single GPU graphics card. Its GPU is Tahiti XT, which packs 2048 stream processors. The reference version of HD 7970 cards comes with 3GB of GDDR5 memory, which is enough even for hard core gamers so PowerColor ran with that. However, the company still overclocked the memory from reference 1375MHz to 1425MHz.

HD 7970 Vortex II’s GPU runs at 1100MHz. This impressive overclock of almost 19 percent (175MHz) means that the best Tahiti XT GPUs can run beyond 1GHz and score some really great performance. Of course, Vortex II cooling plays an important role as it provides adequate cooling for the GPU, memory and other components that bear the burden of the overclock.

In fact, Vortex II cooling promises 12 percent lower temperatures while at the same time being up to 15 percent quieter than the reference cooler. This is what PowerColor says on the box, but we will check that out soon.

We believe you’re anxious to find out about the design of HD 7970 Vortex II graphics card and how it fares versus Nvidia’s GT 680, so we’ve got a treat for you. Namely, we have two GTX 680 graphics cards, one of which is a factory overclocked Phantom graphics card, so the fight should be interesting. 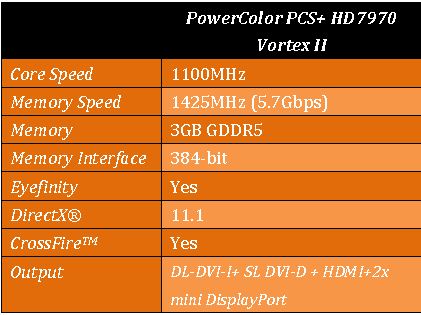