Back in September 2011, Apple's iOS 5.1 Beta release provided hints of a refreshed second-generation iPad 2 model that would be quietly making its way into retail channels alongside the WiFi-only model (iPad 2,1), the AT&T / GSM model (iPad 2,2) and Verizon / CDMA model (iPad 2,3). The secret model is codenamed iPad 2,4 but the Apple world now knows it to be the $399 cost-reduced 16GB WiFi-only model. 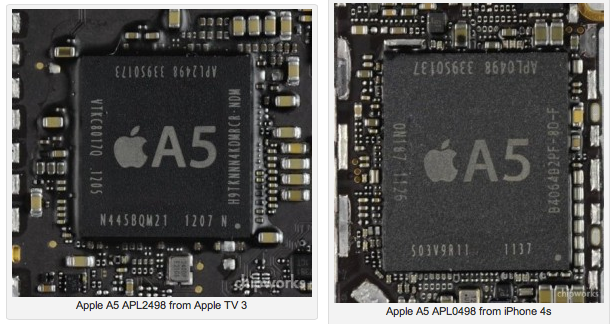 Apple announced the $399 cost-reduced iPad 2 16GB WiFi (iPad 2,4) on March 7th alongside the third-generation iPad announcement. But the information that many users may not have been aware of until now is that this model contains Apple's revised A5 SoC (S5L8942) and is a 32nm chip built on Samsung's High-K Metal Gate (HKMG) process. In contrast, Apple's original A5 SoC (S5L8940) for the iPad 2 is a 45nm chip built on Samsung's LP CMOS process. The folks at AnandTech opened up an "iPad2,4_5.1_9B176_Restore" IPSW file and discovered numerous references to Samsung's 32nm S5L8942 SoC, indicating without a doubt that this model contains 32nm silicon.

Nevertheless, the new third-generation Apple TV and the iPad 2,4 both use the exact same 32nm A5 SoC, but the iPad 2,4 has both ARM Cortex A9 cores enabled as opposed to just one enabled on the Apple TV. If you're an owner of the cost-reduced $399 iPad 2 16GB WiFi model, then you can brag to your friends that you have a 32nm chip inside. And yes, you officially have some bragging rights considering the new third-gen iPad with A5x SoC and faster graphics is also built on a 45nm Samsung process node.