Earlier this morning, Redmond-based software giant Microsoft released an early sneak peek of its upcoming Office 15 productivity software to a select group of beta testers on Microsoft TechNet. Unfortunately, the testers received "special access" passwords and were obligated to sign non-disclosure agreements (NDAs) preventing them from sharing any details with the rest of us.

Over two years ago in December 2009, we wrote that Microsoft could be planning to launch its Office 15 suite in the same relative timeframe as Windows 8 in 2012. According to the company's latest plans, however, Windows 8 will be available beginning Q2 2012 for developers and Q3 2012 in retail channels, while Microsoft Office 15 should be available in Q4 2012.

What exactly Microsoft has in store for Office 15 it wont explicitly say, but the company's Technical Preview Blog proudly declares it as "the most ambitious undertaking yet for the Office Division."

For those who missed out on this private beta preview (ourselves included), Microsoft has stated that it will formally release the Office 15 Public Beta sometime this summer. 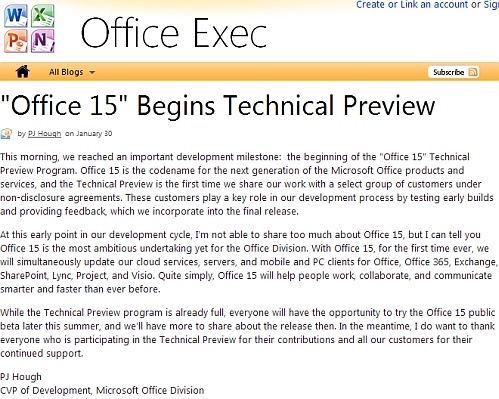 Last modified on 31 January 2012
Rate this item
(0 votes)
Tagged under
More in this category: « Apple's next-gen iPhone most likely will embrace NFC Lenovo ThinkPad Tablet gets Ice Cream Sandwich in Q2 2012 »
back to top