EVGA’s GTX 690 we’re reviewing today is no different than the reference model of GTX 690, so everything you’ve learned about the reference card applies here as well.

In general, you shouldn’t expect to see many non-reference GTX 690 cards around. Quite understandably, as most users won’t need it due to the already excellent reference design. So, we’re locked and loaded to confirm it once more with help from EVGA’s GTX 690.

GTX 690 uses GK104 GPU, which is a part of Kepler family. Nvidia did a great job and Kepler beats the earlier generation, Fermi, in both power consumption and thermals. These two advantages in particular made it possible to build a dual-GPU card that’s quieter than all the earlier dual-GPU cards, while being faster at the same time.

Base GPU clock stands at 915MHz, which is 9% lower than the GTX 680’s Base Clock (1006MHz). In fact, this is the only difference when compared to GTX 680’s GPU. The rest of the specs reveal that the GK104 use on GTX 690 is identical to the one on GTX 680 cards. There’s no difference in memory either – the bandwidth is identical. The memory runs at 6008MHz (GDDR5) and each GPU has 2048MB of GDDR5 at its disposal. This suggests that performance is comparable to that of GTX 680 cards in SLI mode. However, GTX 690 does have its advantages, and we’ll discuss them in more detail on the following pages. 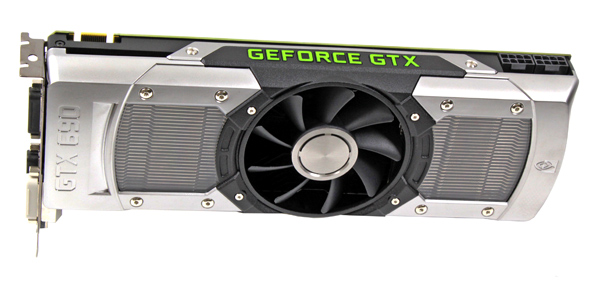 Below you see GPUZ screenshot showing that EVGA’s GTX 690 runs at reference clocks. While EVGA could have personalized the cooler, why fix something that ain’t broken? The only custom thing on the card is controllable lighting underneath the GEFORCE GTX sign.

Prev Next »
Last modified on 04 July 2012
Rate this item
(0 votes)
More in this category: « LG Optimus 4X takes on One X, Galaxy S III Nexus S gets Jellybeaned, blows ICS out of the water »
back to top