Before we can think of a conclusion we need to check the system costs and performance. As usual the Intel platform is a tad pricier and with the integrated graphics core overclocking works well too, but we think overclocking an AMD system is just easier. Performance wise AMD is not as far off as Intel would like them to be. The Athlon II X4 series is very cheap and at the same price level as the more feature-rich i5-6xx series, but the Athlon features four real cores compared to Intel's two cores with hyperthreading. 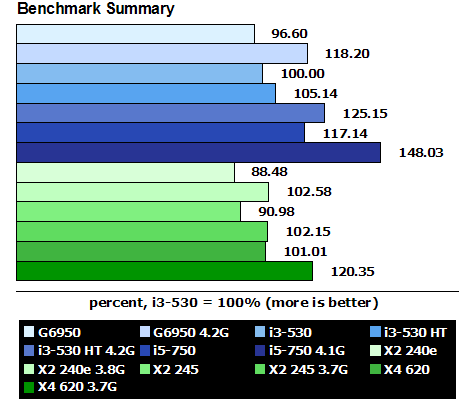 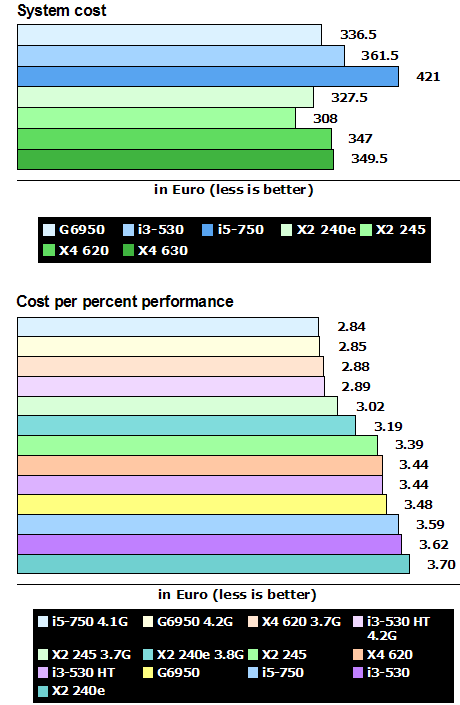 
While a comparable AMD system is a tad cheaper, AMD does not cripple it's chipset and CPUs as much as Intel does. By cost per performance the performance as you have seen is on par, even hyperthreading on the i3 does work well. What is surprising, AMD can cope with Intel even in idle power consumption. As you can see, Intel and AMD are pretty close, but with advantages for AMD in our test. We will test shortly the MSI H55M-ED55 board which supports a low power consumption VRM which may close the gap but comes with a hefty price tag. While games are mostly optimizied for Intel, even AMD can cope quite well as seen in FarCry2 with an HD 4850 installed.

AMD 785G boards are about the same price-levels compared to the H55, AMD CPUs and chipsets offers more features and the 785G offers TrueHD/DTS-HD MA streaming. AMD CPUs can be under-voltaged very well which gives AMD 45nm CPUs a better standing against Intel 32nm parts. Also AMD is not not in the habit of changing the socket with every platform which gets really tiresome. The only advantages Intel CPUs have to offer are better overclocking and better performance in single threaded scenarios. For a causal gamer this is not that much important. Compared to our last CPU review, DDR3 memory prices have spiked with an increase of about 25%. Also the AMD Athlon II X4 620 has seen prices under €68,-/$80 while now it costs about €83,-/$96. It seems this CPU will be phased out soon, so we suggest you get yourself a X4 630 instead, which costs now only €2,50/$4,- more but offers an increased clock-speed of 200MHz which should improve performance about 5-7%. The Intel Pentium G6950 is available for about €74,-/$98,- while the i3-530 sets you back about €99,-/$125,-.

Of course the choice is yours but for low cost systems we prefer AMD over Intel. For gamers the i5-750 offers four real cores and turbo modes which increases the performance especially in single threaded applications, but the Athlon II X4 still offers a very cheap way to get a quad core CPU. We will check out the Phenom II X6 shortly which will bring six cores at nearly the same price as the i5-750 to the masses.