First day with early preview
Ever since we learned Microsoft would let everyone to download a developer preview of Windows 8, we were gearing up to take it for a ride and tell you about it.

There are currently three versions available. The 64 bit (3.6GB download) and 32 bit (2.8GB) versions of Windows 8 Developer Preview are the smallest to download or you can grab the whole package named Windows Developer Preview with developer tools English, 64-bit (x64) with 28 Metro style apps including the BUILD Conference app and some developer tools. We went for the last one.

You can find all of them here and we can remind you that Microsoft download servers were blazing fast yesterday and from 50 Mbit a sec it took us less than 15 minutes to finish this 4.8GB download.

Since Sapphire’d Edge HD2 Atom D525 based nettop doesn’t have an optical drive since the Windows Developer Preview with developer tools English is slightly bigger than normal 4.7GB DVD, we had to go for USB installation. After spending some time trying to find the right way to do it, we stumbled upon a free tool called Windows 7 USB/DVD Download Tool. It can convert an ISO file to a USB bootable installation. You can get it here.

Once you get this done, you can start the installation. Your machine has to have an option to boot from USB, but most systems that came out in the last few years support this, so it’s not an issue.

The installation unpacks quite quickly and there is a popular option to install it next to Windows 7 and make them a dual boot or you can just install it over your existing Windows 7 and get all the programs and settings. We went for a clean install and it takes less than 15 minutes to get this done. The first boot takes a bit longer than usual, but we can confirm that Edge HD2, a nettop powered by Atom D525 dual core clocked at 1.8GHz and 2GB, runs Windows 8 just fine. Two 1.8GHz cores were free most of the time even with bunch of stuff opened, and on average we’ve seen between 900MB and 1.2GB memory occupied. This is pretty good for a new OS and it is a sign that users running slightly older, underpowered hardware should not shy away from Windows 8. 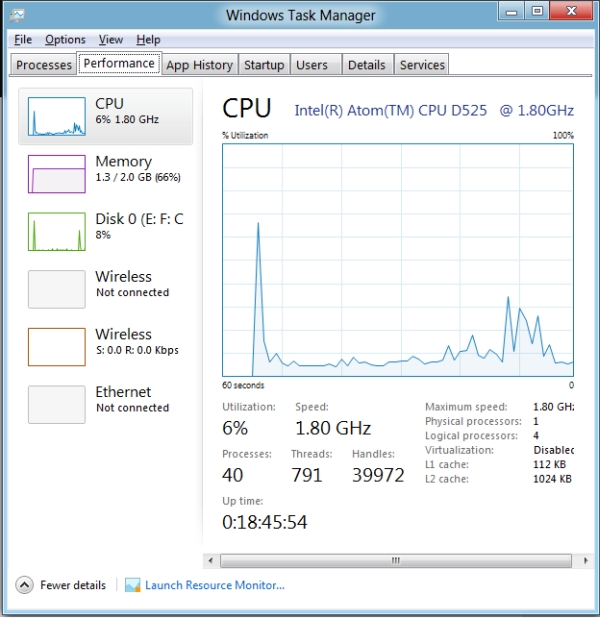 There are currently two modes of Windows 8, one is a tablet view, obviously optimised for touch screen, but you can use this one with the mouse, or you can simply go and chose the desktop mode, something that really reminds us of the usual Windows 7 desktop. The Windows button will do the switching job and it goes very fast. You can get some additional options by dragging your mouse in the far bottom left corner and chose a search, share, device or options but the programs tab is missing from this desktop mode. 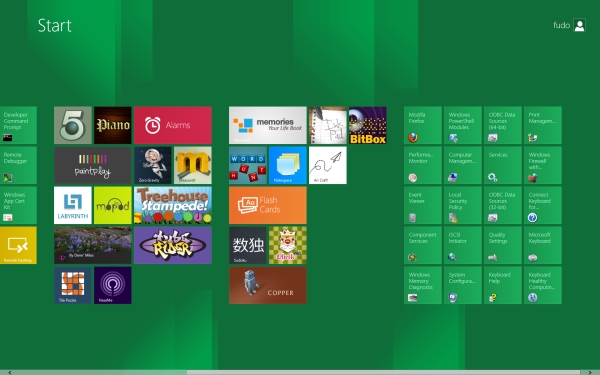 It’s easier to see programs listed in tablet mode, or you can chose a search option and find what are you looking for. The first application we installed was Mozilla Firefox and we can confirm that it works just fine. We tried a few applications that comes with Windows 8, including a few games, but this was the first obstacle that we've seen so far. Sapphire HD2 is powered by Nvidia ION, and currently there is no 3D driver acceleration with this Nvidia GPU. We can hope to see this soon.

The installation comes installed with generic Microsoft Nvidia driver that gives you the right resolution and can let you play YouTube in HD but it still lacks a lot of capabilities of this ION 2 chip. This also means no 3D games or acceleration for the time being. Let’s hope Nvidia can come up with Windows 8 driver soon, but Nvidia officially stated that it doesn't have any updates on driver to announce just yet.

Let me remind you that all other drivers were installed just fine, including sound and wireless as well as Microsoft Keyboard. Even the mouse scroller worked just fine. Installation of Windows Live also went well, but some tools such as Deamon virtual drive didn't.

Most of the common software works just fine, but we played with a few new things in tablet mode. The news application can load and read Fudzilla news just fine, and you can see on the picture how the new tablet & touch interface looks like.Some familiar programs like run, wordpad or notepad are also there. 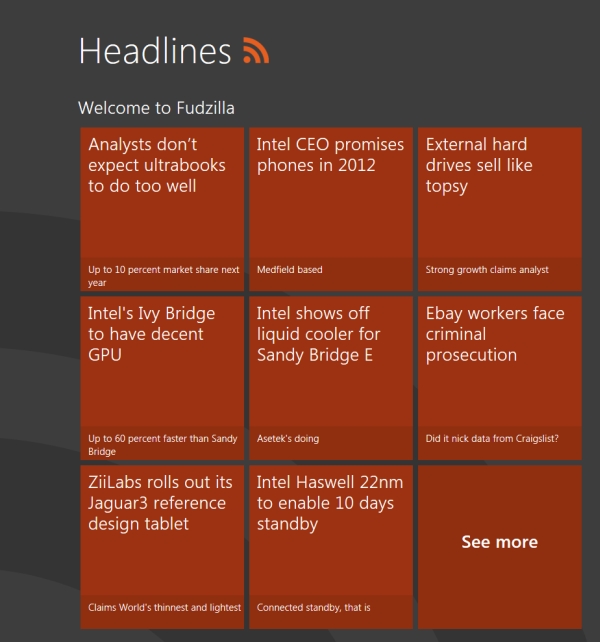 Windows Explorer 10 tends to be laggy in tablet mode, while in Windows Desktop mode works like a charm. Let’s not forget that applications in tablet mode all run in full screen.

Windows Developer Preview, what aims to become Windows 8 beta, is a step in the right direction. This might become first operating system that can unite desktop, notebook and tablets, something that both Android and Apple operating systems are missing, at least for the time being.

Windows 8 developer preview looks quite similar to Windows 7 in current desktop mode, but the touch mode is quite intuitive and it won’t take you long to get use to it. It will take roughly a year before you see the final Windows 8 ready, but even this pre beta version looks quite nice.

Many companies are very enthusiastic about Windows 8 and once Windows Phone gets closer to Windows 8 and Microsoft Xbox live start talking to it, Microsoft will create quite strong environment for both home, business and enterprise users.

We call it a good start in the right direction.