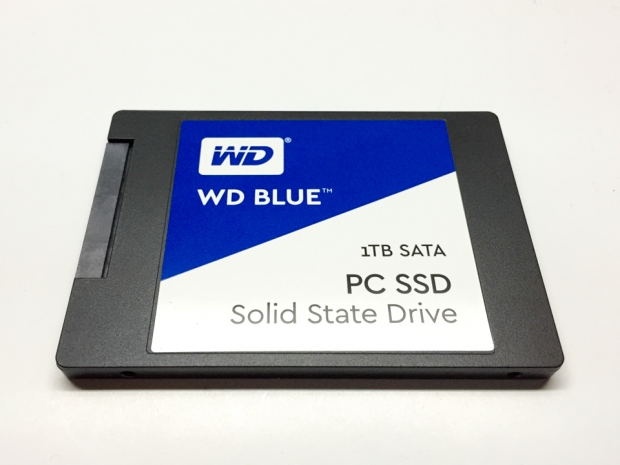 Western Digital has come a long way since the early 1970s when it was the largest independent calculator chip maker in the world, as well as a manufacturer of Pascal programming language microcomputer products and single-chip floppy drive controllers. Since then, the company has been a key player in developing hard disk controllers that have led to newer technologies such as the first 2TB SATA drive using perpendicular magnetic recording, to helium-filled drives in 6TB and higher capacities.

With the introduction of WD Blue and WD Green solid-state disk lineup, it is showing interest in not only becoming a key player in the SSD business, but also in complementing its existing lineup of workstation and enterprise hard disks with the new technologies and features it acquired in its SanDisk purchase last Fall.

The WD Blue 1TB SSD includes a total terabytes written (TBW) rating of 400, still higher than the other drives included in the price-per-gigabyte chart, though some of them include 5-year warranty ratings.

While the OCZ Trion 150 960GB gets higher sequential speeds overall in our tests, the WD Blue is notable for its 4K read performance at QD32 and QD64. At these queue depths, the drive is almost two and a half times faster than the Trion 150 but only for read speeds, making it useful in particular situations but still trailing behind in random and sequential write performance. This may be attributed to the drive’s 100,000 IOPS 4K random read rating, while the Samsung 850 EVO is rated at 98,000, followed by the SanDisk X400 and Ultra II at 95,000.

On the positive site, this is one of the first drives along with Samsung’s PM953S NVMe SSD to support multi-stream writes, which is a way to reduce write-amplification by erasing blocks with unique stream IDs at the same time. This can help reduce the fragmentation of traditional garbage collection routines and improve the lifespan of the drive, which is likely a contributing factor to its higher 400 TBW rating.

The WD Blue 1TB is available at Newegg for the manufacturer suggested price of $299.99, which seems a bit high for a launch price when competitor products such as the OCZ Trion 150 960GB can now be purchased for $226. But it seems the company is targeting the Samsung 850 EVO 1TB, as this drive offers higher 4KB random read and write speeds and is currently priced at $306.07.

On the other hand, the WD Blue 1TB is more similar to the SanDisk X400 1TB based on other reviews. The main difference between the WD Blue and SanDisk X400 seems to be that one has a higher endurance rating and uses different firmware, as both are using the Marvell 88SS1074 controller. All in all, the WD Blue will need to be priced lower than MSRP in order to account for the additional write endurance rating, and it is possible this will happen as the TLC NAND flash market begins adjusting to having another industry player in the SSD market.

« Prev Next
Last modified on 12 October 2016
Rate this item
(9 votes)
Tagged under
More in this category: « Martian A8 notebook reviewed Check out the Cosmic Watch »
back to top