Today we will be playing around with AMD’s most powerful graphics card, courtesy of PowerColor. Oddly enough, PowerColor is not using standard R9 295X2 branding for its dual-GPU card. It calls it the Devil 13 Dual GPU R9 290X. The marketing plan is simple – PowerColor wants to differentiate its dual-Hawaii card from the rest of the field.

It is not just the branding, though. The PowerColor card features a 100% custom design with a triple-slot air cooler and a custom PCB with 10+3+2 power phases and four 8-pin connectors. Under the bonnet the Devil 13 is essentially identical to the R9 295X2, as it features two Hawaii XT GPUs on a single PCB.

The PowerColor Devil 13 Dual GPU card is not easy to find in European retail and therefore it is quite a bit pricier than the reference card. On average you are looking at about €1,330 in Europe, which is €130 more than the reference card. However, in terms of value it is still an interesting proposition. The card ships with a bundled Razer Ouroboros gaming mouse, which costs about €130 on its own. 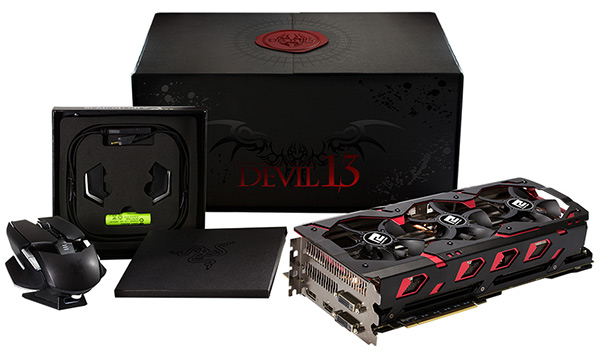 It is no secret that AMD went for world beating performance with the R9 295X2, hence there was not a lot of emphasis on power consumption. AMD pulled out all the stops with the 295. The card has a TDP of 500W and AMD’s power target for each individual GPU is 208W. For example the old HD 7990 had a TDP of “just” 375W, while a single R9 290X card boasts 250W. The PowerColor card can go even higher once you overclock it.

Each of the Hawaii XT GPUs has 2816 Stream Processors and 64 ROPs enabled. The 28nm die measures 438mm2 and it houses 6.2 billion transistors. It is AMD’s biggest GPU to date and the dual-GPU R9 295X2 card can churn out 11.5 TFLOPs of compute performance.

Compared with the dual-GPU HD 7990 based on the old Tahiti core, the new card delivers a 40 percent performance gain in shading and texturing. The ROP throughput has been doubled, the memory capacity was increased by 33 percent and the bandwidth went up by 11 percent. Each GPU on the card has 4GB of GDDR5 at its disposal. The memory is clocked at 5GHz effective. Operating on a 512-bit memory bus, this translates into 320GB/s bandwidth per GPU.

The GPU was not crippled in any way and performance should be similar or nearly identical to two R9 290X cards in Crossfire.

PowerColor also boosted the memory clocks by 100MHz, so the PowerColor Devil 13 offers somewhat higher performance than the reference card out of the box. The memory is clocked at 1350MHz. This bumps the bandwidth up to 346GB/s, which is about 8 percent more than you’d get on a reference R9 295 X2 card.

Bear in mind that PowerTune regulates the GPU clock, which means there is no longer a fixed clock. The 1018MHz clock is the highest clock and usually you will see somewhat lower clocks. In most cases the card throttles down to stay within the thermal envelope. AMD’s clock management technology is similar to Nvidia’s Boost auto-overlocking feature. It uses thermal and power headroom to utilize the GPUs in the best possible way.

As for PowerColor, it decided to change the basic design and equip the card with a triple-slot air cooler. Hopefully the cooler should not have a problem of keeping two GPU clocks at the maximum during extended intensive GPU load scenarios. We will check whether it can provide overclocking headroom for the Devil 13 card.

Prev Next »
Last modified on 21 August 2014
Rate this item
(0 votes)
Tagged under
More in this category: « Xigmatek Nebula tested PowerColor TurboDuo R9 285 reviewed »
back to top