Following the success of its Atom and Brazos based Edge HD systems, Sapphire has decided to introduce a new mini-PC with a twist. This time around, Sapphire decided to go for Intel's Sandy Bridge based Celeron 847, instead of the usual E-series AMDs APU and Atoms found in previous Edge HD models.

The Edge HD4 uses the same chassis as the Edge HD3 that we had a chance to review here, meaning the Edge HD4 is still one of the smallest fully featured PCs. The dimensions are 193 x 148 x 22mm and it weighs a mere 530g, about the same as an average tablet. 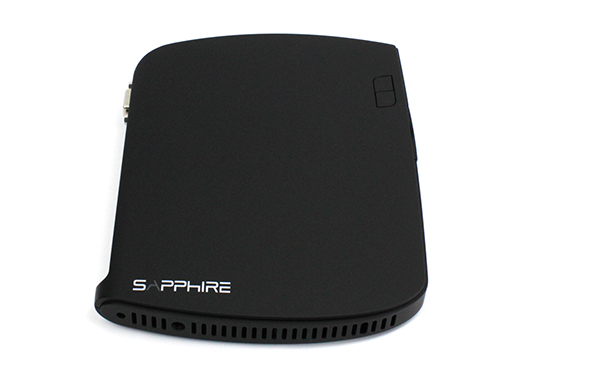 The Edge HD4 is powered by Intel’s dual-core Celeron 847 CPU clocked at 1.1GHz and the chip features embedded DX10 ready graphics. This CPU hails from the previous Sandy Bridge generation, built using Intel’s 32nm process. The current Ivy Bridge generation is in 22nm, but bear in mind that AMD’s Brazos 2.0 is a 40nm part, while Atoms are still stuck at 32nm.

The CPU is coupled with Intel’s NM70 chipset and the processor is integrated on the motherboard. It has a TDP of 17W, which is the norm in this market segment and it is roughly on par with Brazos chips. Low voltage chips don’t offer top notch performance, but they are not meant to. The HD4 is fast enough to handle full HD video and the usual Office suite, but we will get to the performance a bit later.

The Edge HD4 ships with 4GB of DDR3 memory and a 320GB hard drive. It has features VGA and HDMI video outputs, along with built in wireless and a sole USB 3.0 port. It does does not ship with preinstalled Windows and potential buyers should bear this in mind.