The GTX 680 Phantom’s fans are less noisy compared to reference GTX 680 ones. Note that there were no sudden changes in fan noise. However, two 8cm PWM fans tucked away in a special chamber within the heatsink does introduce one disadvantage - the card is 2.5 slots wide.

Note however the codependency between thermals and clock calculations, which may result in different performance depending on thermals. As soon as the card overheats, which causes current leakage increases, GPU Boost will decrease clocks and voltage.

Gainward’s GTX 680 Phantom consumed not more than the same company’s reference version. GTX 680’s power consumption is a little better than that of its main competitor – HD 7970. However, AMD’s card boasts ZecoCore, a feature that shuts the card down once the display is off, which slashes consumption to mere 1W. The same scenario will see the GTX 680 consume about 14W. Still, GTX 680’s power management is definitely a job well done because the card scores more than 20% better than its predecessor GTX 580 while consuming 50W+ less. 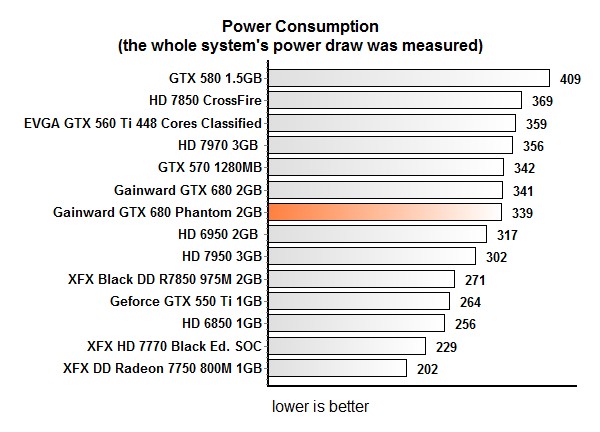