There has been a lot of talk about the Galaxy Nexus, Google’s flagship superphone and the first device to feature Android 4.0. Once again Google contracted Samsung to make the hardware, but hardware aside this phone will probably be better known as the first phone to get the highly anticipated Ice Cream Sandwich Android 4.0 operating system. 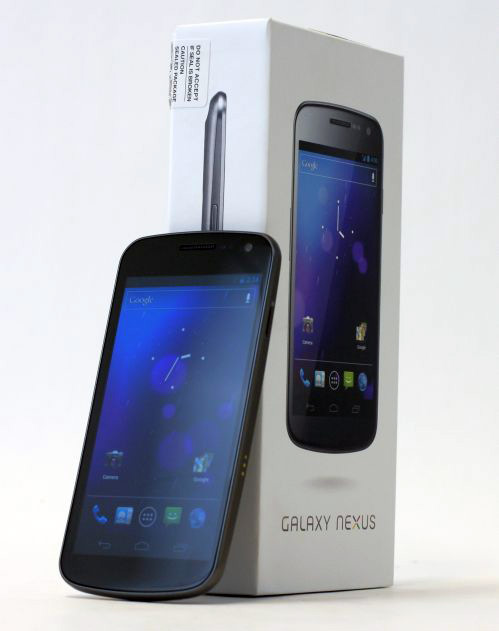 We got this test device shortly before Xmas and we spent quite some time with it. Since it has a new operating system with a few novel features we gave it a somewhat more comprehensive test, in order to take a good feel of what to expect from Android phones in 2012.

The new operating system fuses some features from Honeycomb Android 3.x and Gingerbread 2.3 and Android 4.0 is Google’s first crack at a proper OS that will tend both to tablets and smartphones. The version on our sample was 4.0.1 and at press time it was the latest OS variant, despite the fact that we that US got 4.0.2, with the 4.0.3 update being just around the corner.

The phone comes in an unusually big box that contains the phone itself, a battery, power adaptor, USB cable and headphones. It’s what most people need and of course car accessories can be purchased as separate pack.

It comes with a gorgeous 16-million color 1280x720 4.65-inch Super AMOLED HD touchscreen and right off the bat, we should note that it’s the best screen ever used on any Android phone. The new Galaxy also features a rather underwhelming 5MP camera with autofocus, LED flash and 1080p video support, along with a 1.3MP front facing camera for video calls and Skype. The phone supports USB 3.0, Wlan 802.11n and lower, has 16GB memory, but once again there is no microSD slot for expansion. We were surprised to see that phone features a barometer, along with the more or less usual proximity sensor, light sensor, compass and DLNA certification and NFC. With the right app it will tell you the actual weather conditions around you. It might sound like a gimmick, but hikers, bikers and skiers could find it pretty handy indeed. 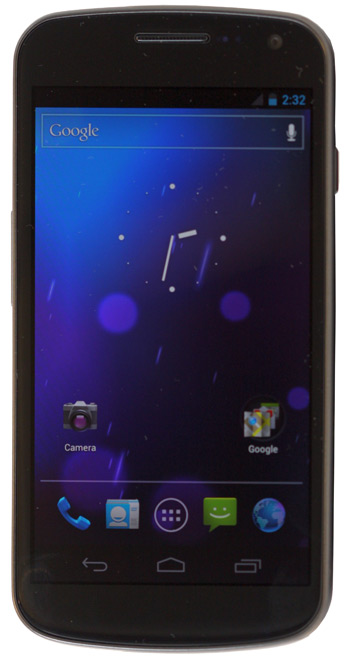 NFC is a nice feature but most people still don’t have a good use for this new technology. It’s interesting to mention that in Vienna, Austria, you can buy an underground ticket via NFC for a few years now and this phone should work with the system, but we didn’t try this.

Despite the all-plastic build, the new Nexus feels pretty good in your hands, too. You can tell that the build quality is very good, and just as with any other Samsung smartphone the power button is located at the right hand side, not at the top where many users will expect it. This has to be a thing that you get use to after a while, but it still feels like the power button should be at the top. The left hand side of the phone has volume keys and the bottom of the phone has 3.5 inch headset in, microphone and micro USB for data and charging.

Like its predecessor, the Galaxy Nexus is an all-plastic phone, but this is not necessarily a bad thing. Samsung used some pretty high quality materials and craftsmanship is excellent. The upside of using plastics is that the Nexus weighs just 135g, which is pretty good for a 4.65-inch phone. It’s also worth noting that the screen has a pretty small bezel, so the entire phone measures 135.5x67.9x8.9mm and it is somewhat more compact than you may expect. For comparison, the old Nexus S measures 123.9x63x10.9mm and weighs 129g, yet it has a 4-inch screen.

The right hand side also has a docking connector, the “three golden dots” that should help you dock and charge your phone faster, but so far this docking station still hasn’t been released. It could be useful down the road, as USB charging is pretty slow, but this applies to all new high-end smartphones. 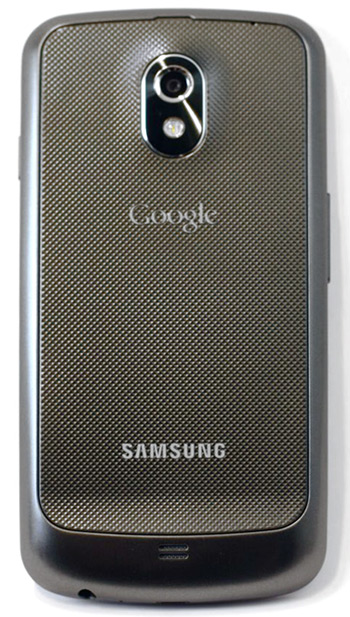 The battery cover feels really good in your hand and it’s very elastic, but taking off the cover and putting it back on for the first time will be a traumatic experience. As the cover has many locks, it will take some force to open or close it, but we didn’t break anything.

One thing you notice immediately is that Galaxy Nexus doesn’t have a microSD slot and many people will miss the opportunity to plug in an extra card to increase the storage. We tested the 16GB version and apparently the 32GB version should also be available soon.

Once you turn the phone on, you can immediately see that the screen is gorgeous. This is without a doubt the best screen ever used on an Android phone. It’s huge, with 4.65 inches is among the biggest screens we’ve ever seen, and with 1280x720 resolution it looks very crisp. The colors are vivid, HD videos are clear and overall it’s great to look it at. Overall we prefer it over the 3.5-inch hi res iPhone Retina display and the 5.3-inch screen used on Samsung’s Galaxy Note. 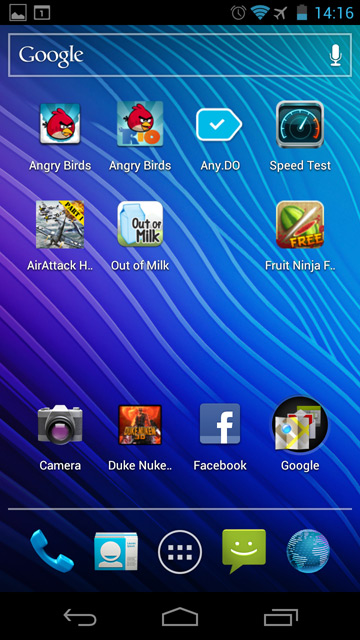 The TFT display of LG’s Optimus 2X looks pathetic next to the Galaxy Nexus, and this obviously applies to any other SLCD screen out there. The screen is definitely what makes this phone great. Bear this in mind, we rescaled the screenshots to 50 percent, or 640x360, so you can imagine how the full resolution looks on such a small screen.

Transitioning to Android 4.0 will be easy to for any Android user, but you will miss some keys. Galaxy Nexus doesn’t have any hardware keys but it has three soft keys that will take you back, home or list all the running applications. 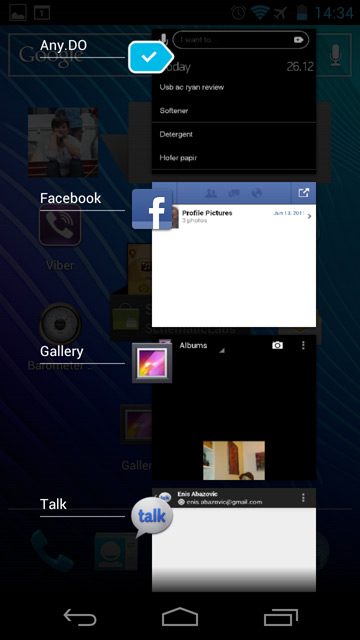 This third key will open one of the greatest things that we’ve seen on Android 4.0, it’s the task manager and as long as you don’t want to see an application running, you just swipe it left or right. It works like a charm and many people will appreciate it. 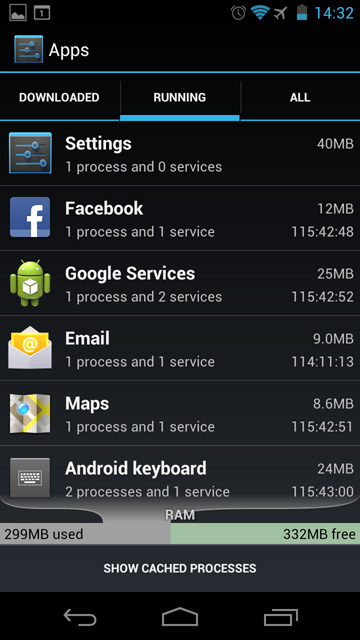 Another Android 4.0 feature is face unlock and this can be either a good or bad thing. In good light conditions, at good angle and if you are steady it usually works fine, but in darker light conditions, in shaky underground commutes or at a awkward angle, it will simply tell you that it doesn’t recognize you. You come frustrated if you need to open a phone many times, e.g. in a grocery store to see a grocery list as you will always have to scan your face. If it fails the second option is a well-known pattern. You also can forget face recognition on sunny days if you happen to be in the shade, as the camera hasn’t got enough dynamic range to cope with such high contrast lighting conditions. We believe most users will stick to the regular unlock screen.

One other new feature is data usage that can tell how much data have you used of your mobile network or Wi-Fi. It’s useful and can turn your phone data if you cross the limit. We liked this feature and it will come in handy for anyone who doesn’t have an unlimited data plan, since it eliminates the need for third party apps. 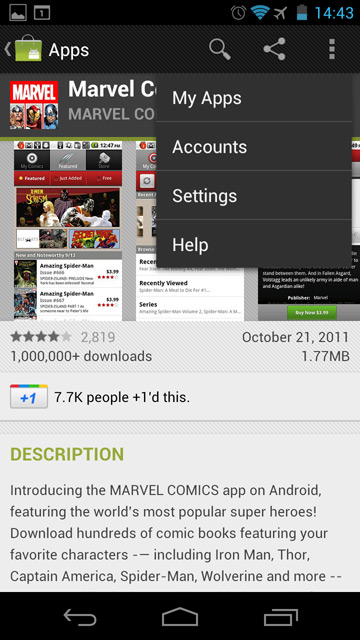 What we didn’t like about ICS is that you miss the properties key that you have on many Android 2.3 phones. Getting into settings is possible via shortcut, but not via any dedicated button. Inside the Android Market application you have a new settings key on top of the application that gets you to my apps, accounts, settings or help. You get used to it after a while. 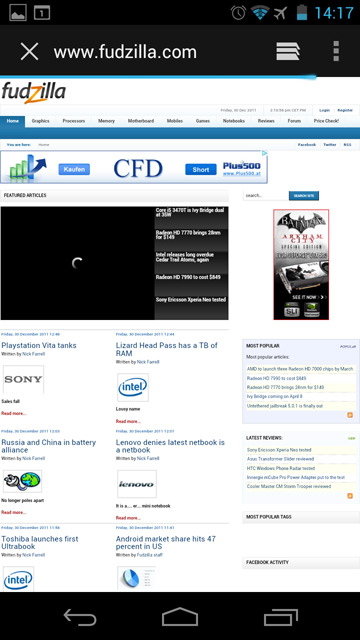 The browser is a bit improved and works like a charm. The OMAP 4 4460 dual-core at 1.2 GHz was enough to push everything quite fast on the spacious 720p screen.

Let’s also mention that some applications didn’t work in Android 4.0. For example, we could not get Viber to work on our sample. For those who haven’t tried it, Viber is a free voice over IP application that lets you send text messages, locations and pictures to everyone who uses it. It doesn’t need a username and pass and it’s linked to your phone number and can be cuter than Skype. Skype did work well. However, Viber is not the only application that doesn’t yet work under Android 4.0. People are complaining about compatibility issues all over the market, but Viber seems to be one of the most popular apps affected.

New widgets and widget management are also a nice touch. However, making a shortcut is much more complicated compared to Android 2.3. You need to go to applications, widgets in order to make a shortcut. This is just a touch away in Android 2.3 which feels weird that Google managed to mess this up. 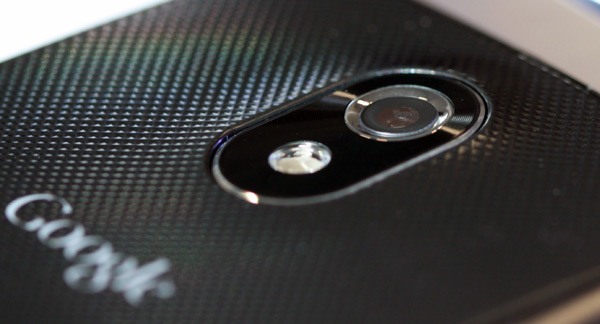 The 5MP camera makes nice pictures in good lighting conditions and flash will help in dark conditions. It’s not spectacular, but it will help you make some decent pictures. It is really fast, faster than many other we’ve seen on other Android dual-core phone, but it’s still not better than the cameras on the iPhone 4 or 4S.

I am sure you want to know what toll the dual-core processor and 4.65-inch screen take on battery life. Well, as usual the answer is that this depends on what do you do with your phone. Of course, the phone can sit in airplane mode for days without recharging, but in real life, a few longer phone calls a day, Wi-Fi browsing and video playing it will last for day or so. Continuous videos or browsing for a few hours will drain your battery quite fast. It felt that Galaxy Nexus has better battery life than LG Optimus 2X, but not by much.

Let’s also mention that watching HD videos on YouTube can get this phone rather warm in the upper part of the phone, close to camera. We suspect that this is where the CPU is. It won’t burn you and it's not too uncomfortable, but you will feel the heat.

This is definitely the best smartphone we had the pleasure to test so far, unless you are an Apple lover and want nothing but Apple, of course.

The Galaxy Nexus has some downsides. The 5MP camera could have been a bit better, but it powers up and takes shots really fast. The biggest downer for us is the lack of a microSD slot but despite that, I could easily recommend this phone to any Android lover. Interestingly, the previous Nexus S shared the same foibles, but Google didn’t seem too keen to address them.

We like the vanilla Android 4.0 experience and the new OS has some pretty nice features to offer. In six months will be available on many phones. By late 2012, it will probably start to be the dominant OS, but with Android these transitions take way too long, even on Google’s own devices, let alone those from Samsung, HTC or any other phone maker.

The Galaxy Nexus is the real deal, it’s a great phone with a beautiful screen and if you are after a phone that’s great for browsing, emails and navigation, it’s probably the best choice right now.

Our sample was supplied by Ditech and the company sells it for €519 in Austria, but it will ship it free to most parts of Europe. In case you find 16GB of storage is not enough, you will have to wait a few weeks for the 32GB version. You can buy one here.