Wing 12 PL comes in a plastic box. You’ll find specs, techs and other details on the back. 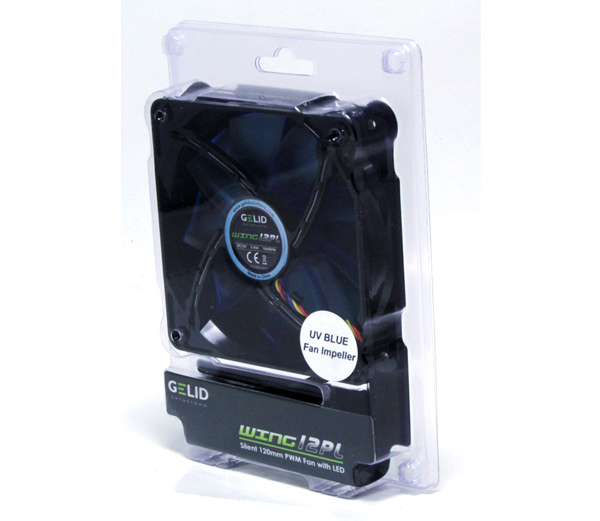 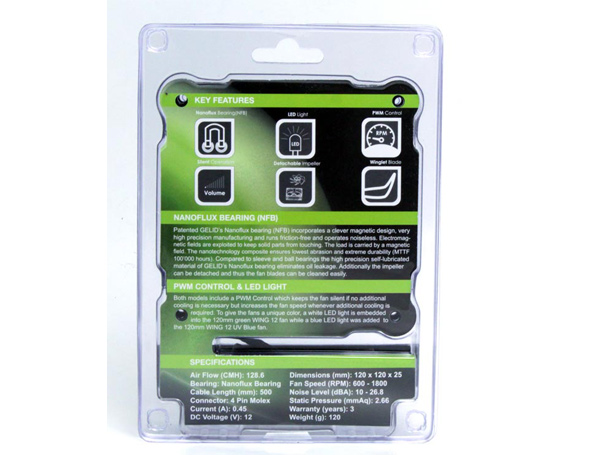 The packaging holds four standard screws, four rubber anti-vibration bolts and one Gelid Solutions sticker. The power cable is about 50cm long and ends in a 4-pin connector. The Wing 12 PL has PWM control, but we can connect it to a three pin fan control connector without losing the option of manual rpm control. 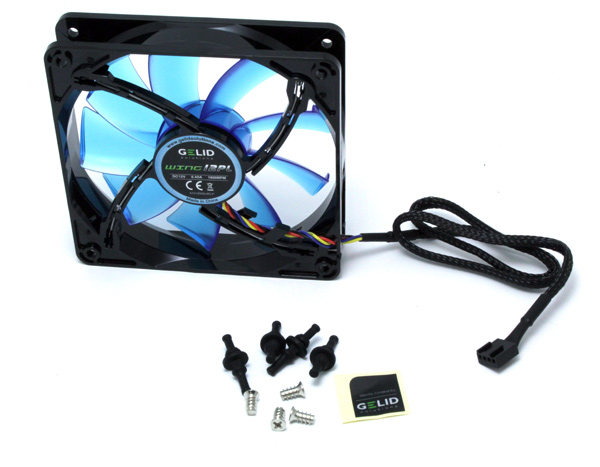 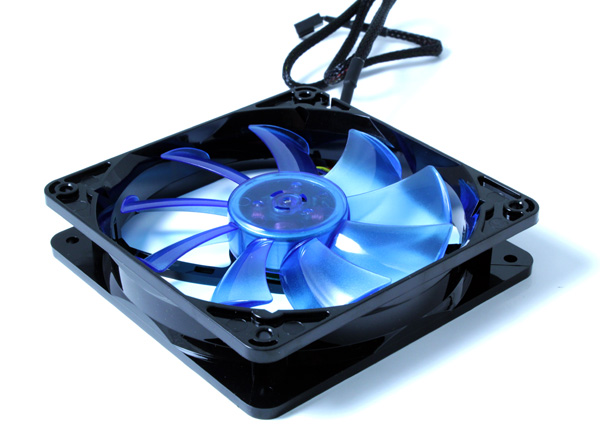 Winglet blades, i.e. ends of the propeller fins, are curved and it helps with aerodynamics and increases airflow. 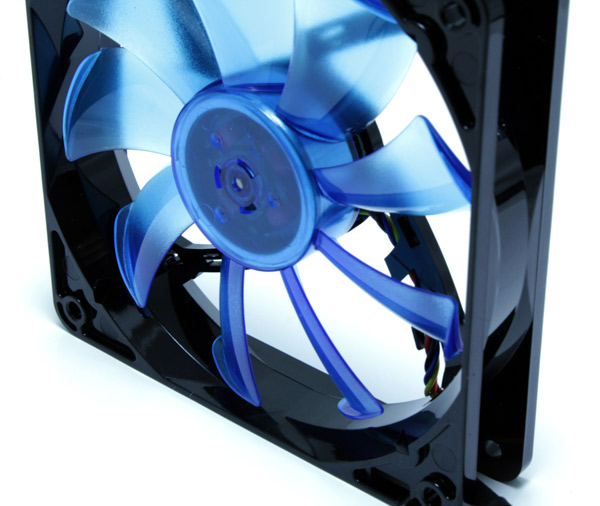 Maximum rpm of ~1800 produces 75.6/128.6 (CFM/CMH) airflow, which suggests that we have one really powerful fan here. However, it also suggests that the Wing 12 PL will not be particularly quiet when running at full throttle.

Direction of the airflow and propeller rotation is described in more detail on the Wing 12 PL’s side. 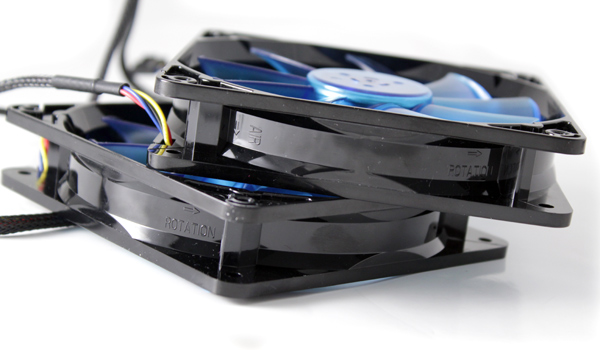 NanoFlux bearing technology significantly decreases friction between mechanic parts and the Wing 12 PL seems almost inaudible when running at 600rpm. Special design enables the propeller and rotor base to be detached and cleaned, which is a big plus compared to classic designs. You can even wash the propeller, but we’d advise you to clean it well afterwards. 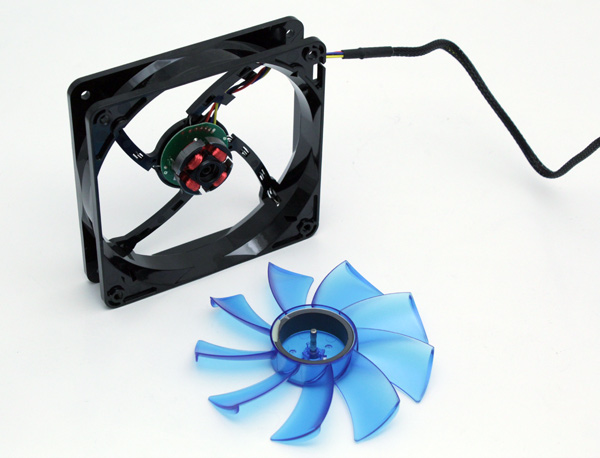 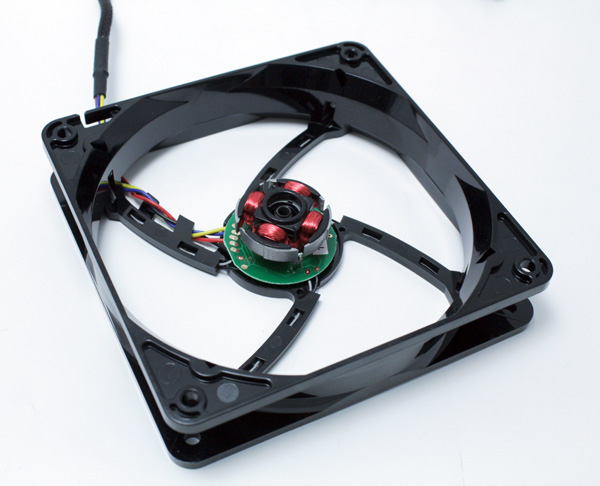 The Wing 12 PL comes with four LEDs in four corners of the fan. There is no option to turn the LEDs off short of turning the fan off. 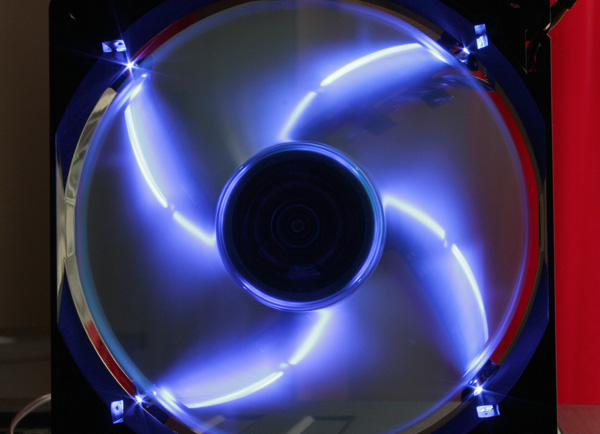 We tested our Wing 12 PL in combination with Gelid’s GX-7 CPU cooler. The Wing 12 PL is part of the GX-7 package, which was reason enough for us to ask Gelid Solutions for another Wing 12 PL, in order to show potential GX-7 buyers just what two Wing 12 PLs are capable of. 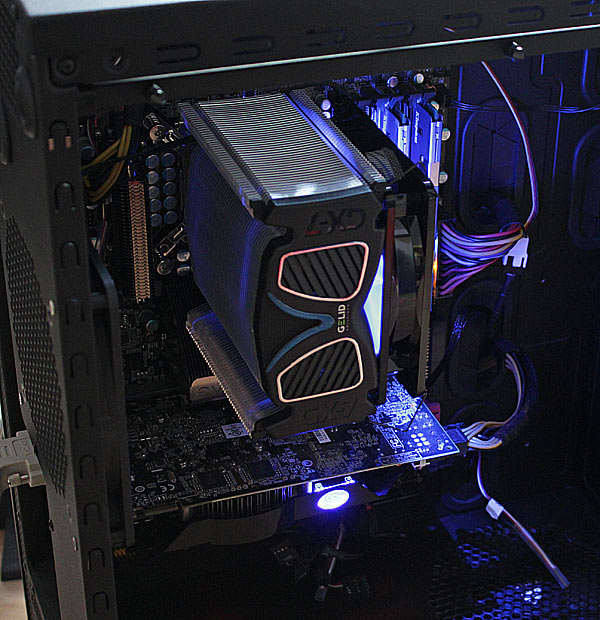 We used GX-7 mounted on EVGA’s FTW3 motherboard in Corsair Obsidian 800D case (with three 900rpm fans) at 22°C room temperature. We measured temperatures at Core i7 930’s reference clock (2.9GHz). In our tables, we used average temperatures of all four cores. We used GC-Extreme thermal paste for all our testing. 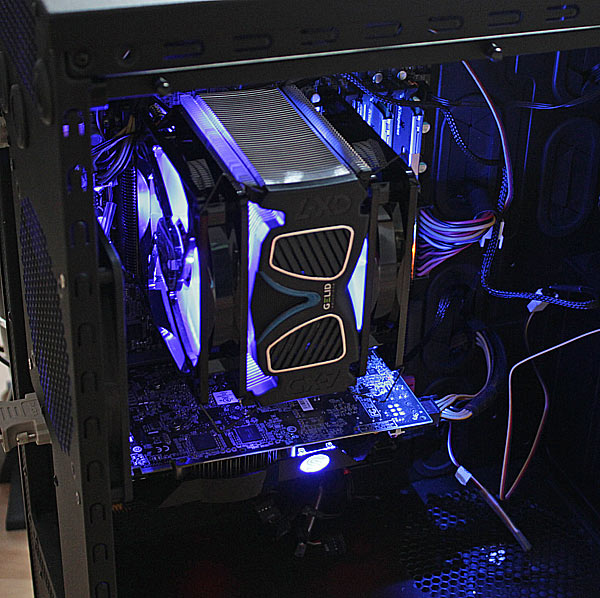 The Wing 12 PL’s specs say that maximum rpm stands at about 1800, which has been confirmed by Scythe’s controller. However, after mounting both fans onto the GX-7, we measured that the fan pushing the air spins at 1890-1920rpm, whereas the one pulling air spun at 1800rpm. We measured identical results after we swapped their places. Both Wing 12 PL fans could be well heard outside the case as they were much louder than all the other fans. 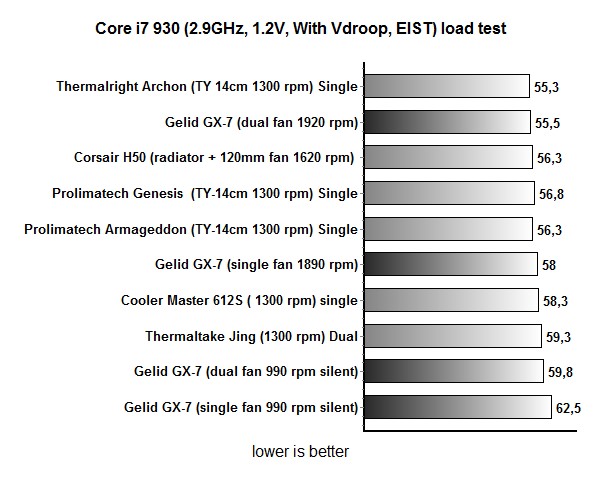 The results showed that the Wing 12 PL is a great performer. When we used only one fan, which spun at 1920/1950rpm, GX-7 cooler did well but was quite loud. While we wouldn’t call the fan too loud, it can definitely be heard. Gamers who have plenty of loud components probably won’t mind though, as they usually strive for raw performance.

Users will have a choice to make – you can either set the Wing 12 PL to run quietly and provide less cooling or let it be loud and get some nice cooling performance. The solution may be in another Wing 12 PL fan, because, as our testing showed, the GX-7 strapped with two Wing 12 PL fans at 990rpm provides both the performance and silence.