The cooler is dual slot and packs two fans. Although massive, it’s not too heavy since it’s mostly aluminum. The frame is made of plastic. It looks futuristic and it most certainly is. The fans, which normally lean on the heatsink, can be lifted off in order to get better airflow. 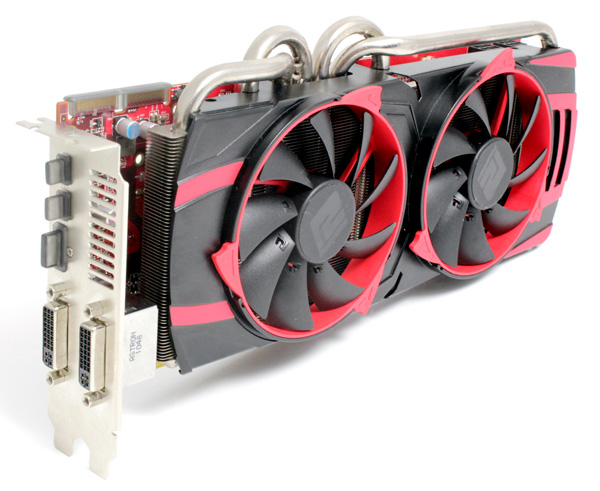 In the Vortex, mode the card extends into the third slot. You’ll need to adjust the fans separately and couple of handles and a light push will do the trick. The fans on PSC+ HD 6950 Vortex II can be moved even when the card is running, but make sure that it’s screwed tight to the back panel.

While the dual fans provide a lot of airflow, they also blow a lot of hot air inside your case. But by lifting the fan, it allows the fan to absorb the cooler air from bottom of the case, balancing ambient temperatures. You can event incline the fans slightly so the airflow is aimed at either end of the card, and as a consequence it will reduce turbulence and help heat spreading effectively from hot areas. 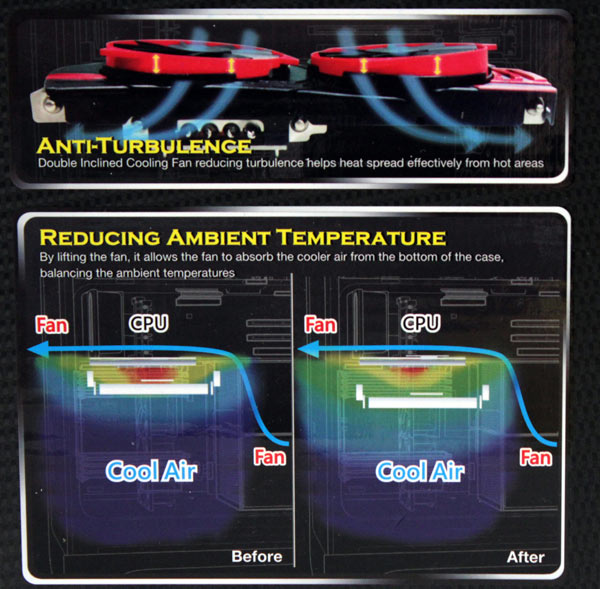 The fan is 92mm in diameter and is connected to the 3-pin connector. Fan speed regulation can be performed via the Catalyst Overdrive or any other tool you may prefer.

HD 6950 Vortex II card is equipped with 2048MB GDDR5 memory. The GDDR5 memory chips are made by Hynix (model number H5GQ2H24MFR-T2C). They are specified to run at 1250MHz (effective 5000MHz), but on this card the memory runs overclocked at 1300MHz. The memory chips are exposed and do not have a passive cooling solution on top of them.

The video outputs reflect the standard Radeon HD6950 design. The I/O panel features two mini-DisplayPort 1.2 connectors, HDMI 1.4a and two DVI connectors (one of them is single-link with a maximum resolution of 1920x1200). By using DisplayPort outputs it’s possible to chain up to six monitors to a single card. You can run four monitors directly from this card by using two mini-DisplayPort connectors, the HDMI connector, and one of the DVI connectors. As far as sound goes, HDMI 1.4a provides Dolby True HD, DTS-HD, AC-3, DTS and up to 7.1 channel audio with 192KHz/24bit output.

Unlike the HD 6800, HD 6900 comes with two CrossFire connectors. This means that you can use four cards in a 4-way CrossFire.

The card also features a dual-bios toggle switch that makes bios updates a breeze. Setting 1 is unprotected for user updates, while setting 2 is the protected factory default mode. 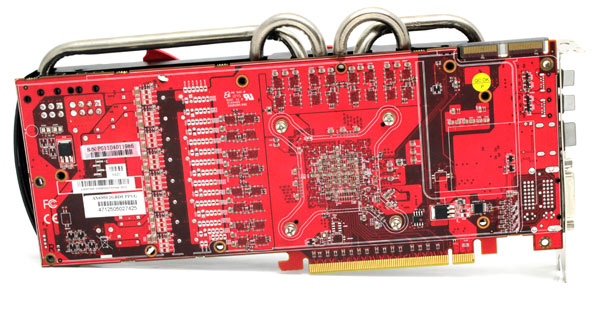 Radeon PCS+ HD 6950 Vortex II will require two 6-pin power connectors. Software GPU voltage control is possible due to use of CHiL's 8228G voltage regulator which supports voltage monitoring via the I2C communications protocol and comes with extensive monitoring and tweaking features. CHiL's 8228G voltage regulator provides the 8-phase power but only 7-phase power is used for this card.