Club3D recently launched its GTX 560 Ti CoolStream OC Edition graphics card that, as the name suggests, comes factory overclocked and strapped with special cooling. CoolStream cooler with two fans should provide superior cooling to the overclocked core and at the same time be quieter than Nvidia’s reference solution.

In fact, CoolStream can be found on Club3D’s GTX 550 Ti CoolStream Super OC Edition that launched yesterday, although with one fan only.

GTX 560 Ti CoolStream OC Edition card ended up overclocked to 880MHz for the GPU and 1760MHz for Shaders.  It features 1GB of GDDR5 memory clocked at 4100MHz and comes paired up with a 256-bit memory interface. We had a chance to check out GTX 560 Ti’s CoolStream cooler back at Cebit but today we’ll see how it fares aboard the GF114.

Before we move on to the card, let us remind you that the GF114 is a derivation of GF104, as is evident from the number of transistors (1.95 billion). However, the GF114 packs a few improvements inherited from the GF110 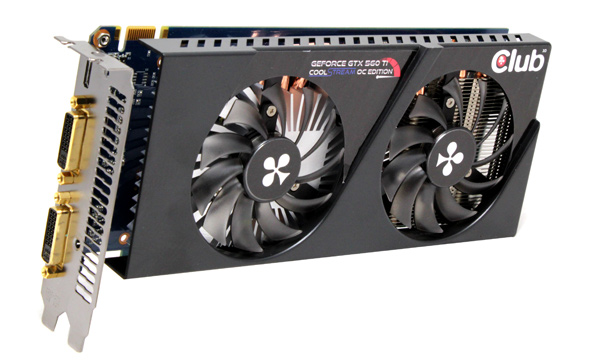