Our guest today is Gaiwnard GTX 560 Ti Phantom. The card is a part of Gainward’s Phantom line, aimed at those who like their cooling effective but silent. GTX 580 and GTX 570 already received Gainward’s Phantom treatment, so we guess it’s expected to see the GTX 560 Ti get the same remake.

Although our card comes with 1GB of GDDR5 memory, Gainward also offers a 2048MB version. We thought that testing the 1024MB versions will probably be wiser as 2GB cards tend to be pricier while not justifying the price difference on the gaming front.

Note that the 2GB version runs at reference clocks, whereas the 1GB version comes factory overclocked. However, the overclock is relatively small as you can see from the GPUZ shot below.

The GTX 560 Ti’s ticker is the GF114 GPU, which received plenty of positive acclaim so far and we’ve seen that the card boasts nice performance-per-clock ratio as well.

Before we move on to the card, let us remind you that the GF114 is a derivation of GF104, as is evident from the number of transistors (1.95 billion). However, the GF114 packs a few improvements inherited from the GF110. 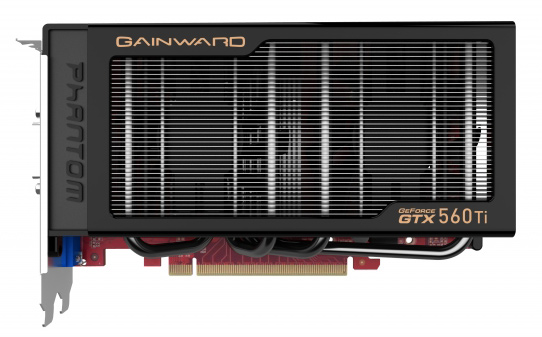 Prev Next »
Last modified on 25 March 2011
Rate this item
(59 votes)
Tagged under
More in this category: « MSI Wind notebook starts the storm Desktop Atom 1.6GHz tested »
back to top