Preview: All about cooling


Cooltek Ultimate Case is the latest case to come out from the company and you can get your hands on it via Cooltek’s online shop at €89.

This is a full tower case that, as you can see from the picture, is anything but ordinary looking. The case packs plenty of details and while this is mostly a matter of personal preference, we really liked the color scheme. Cooltek nicknamed this case CUC so we’ll use the name as well, but for now let’s look at Cooltek Ultimate Case. 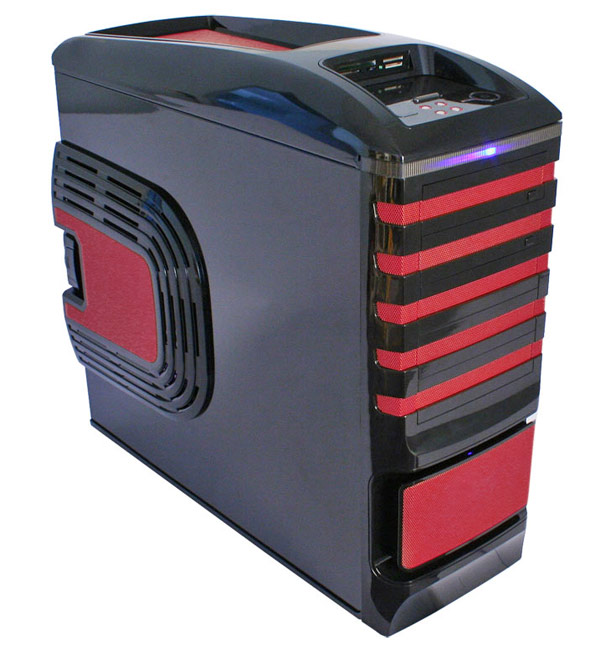 Cooltek Ultimate Case packaging is a cardboard box – still it’s sturdy enough. Plenty of pictures and specs can be found on the box. 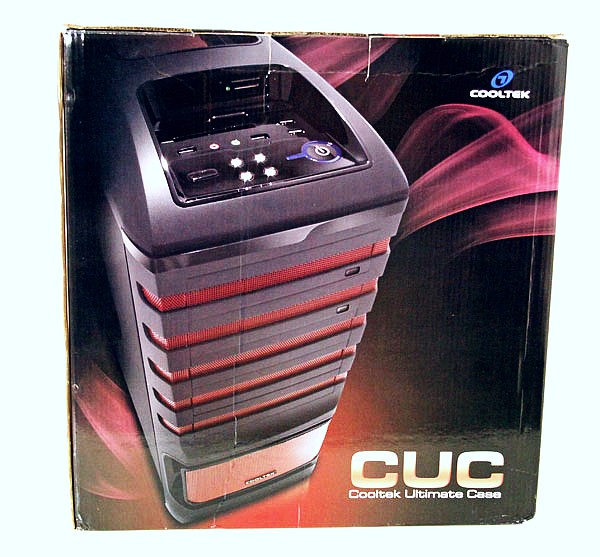 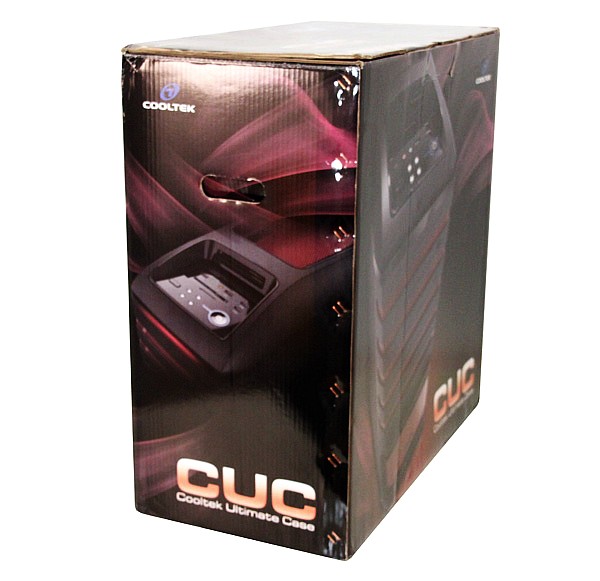 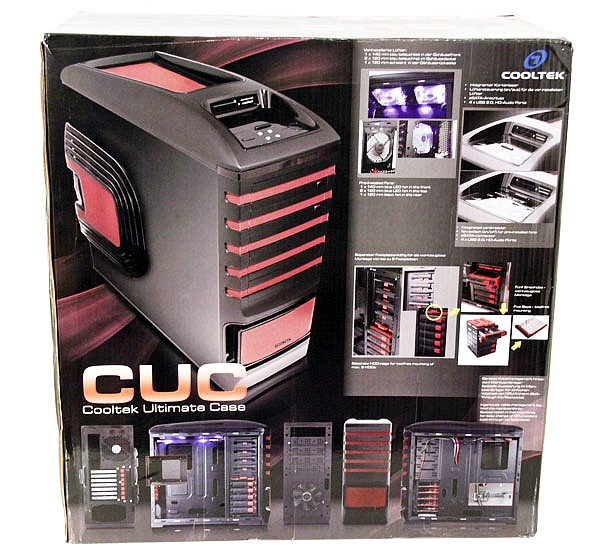 All the details are written in English and German. 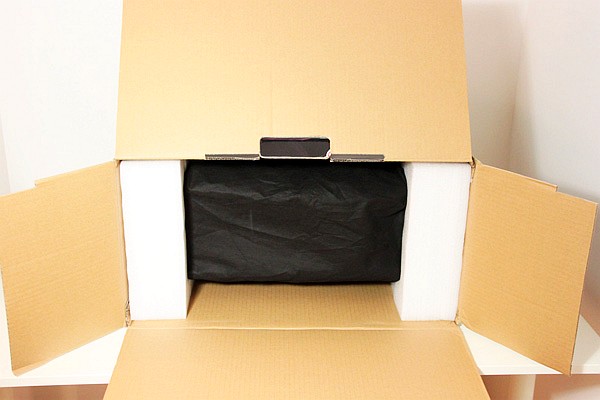 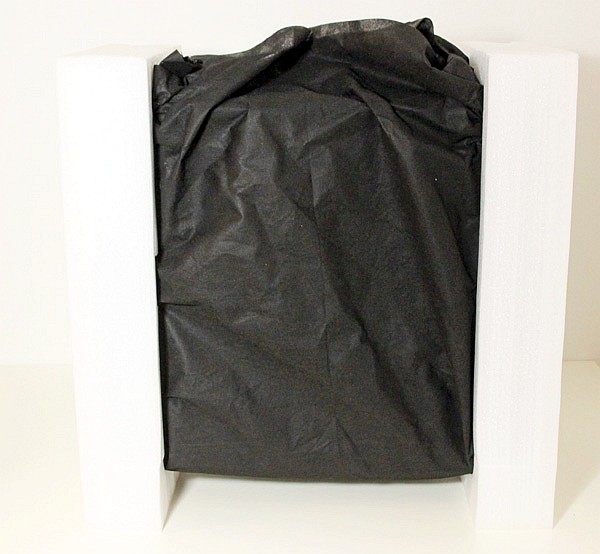 We must admit that CUC is a fingerprint magnet and we realized that while unpacking it. This means that without cleaning, CUC won’t keep its good looks. Fortunately, Cooltek thought about everything and as we went on digging through the box we found a nice cleaning cloth and a couple of other things. As you can see from the picture below, Cooltek really thought of the little things – something we don’t see very often. 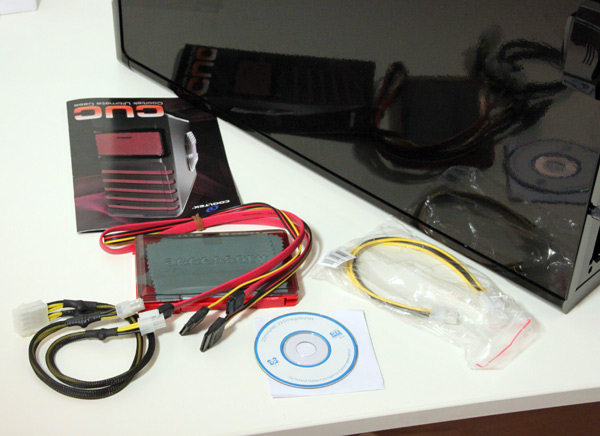 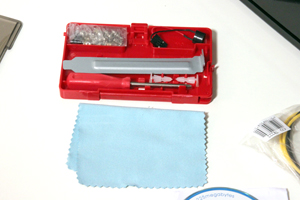 CUC isn’t lacking in details but it does seem somewhat “plasticky” and thus gives the impression of being cheap. It’s made of 0.8mm steel and plenty of plastic. The case measures 210 x 525 x 560mm (W x H x L). 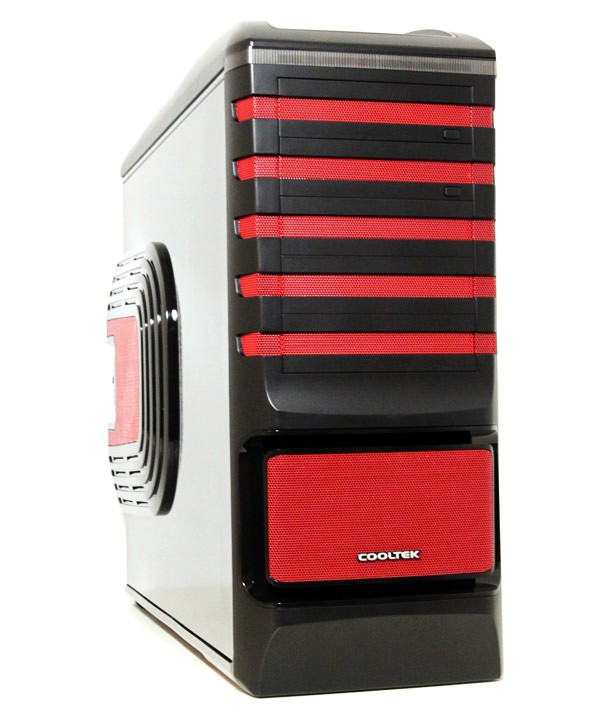 Side panels are made of steel but the front and top panels as well as the extrusions on the side panels are made of plastic. Of course, considering the price this is quite understandable. Cooltek sacrificed steel in order not to skimp on accessories and features – and we’re all for that course of action as long as the functional aspect is improved or at least left intact. 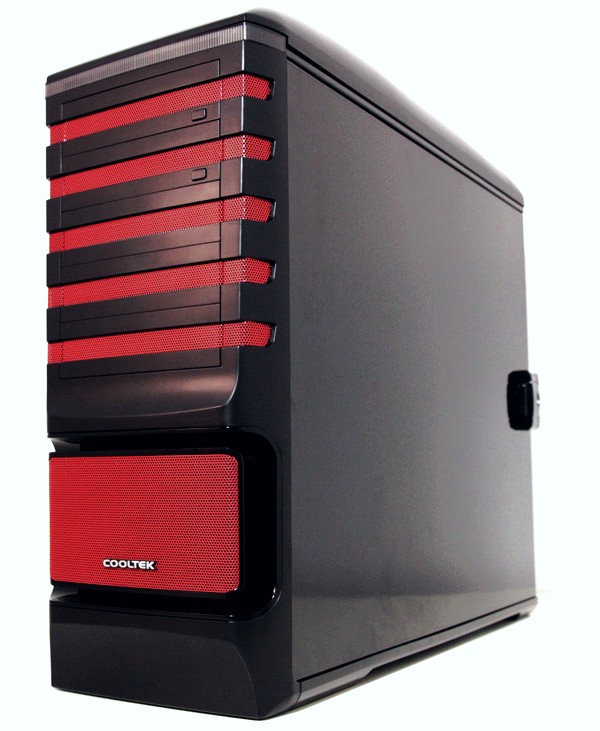 The front panel houses five 5.25’’ bays, first two of which have movable lids. This is of course purely for aesthetic reasons. 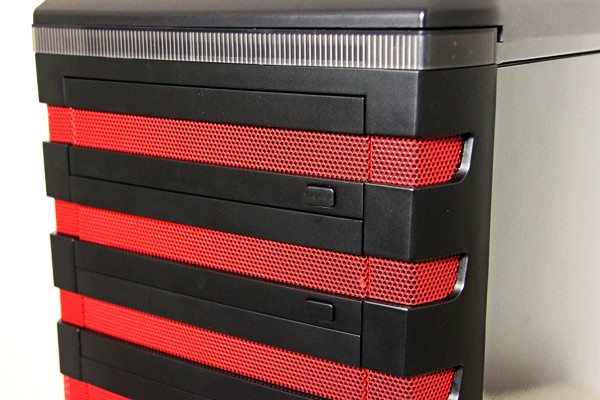 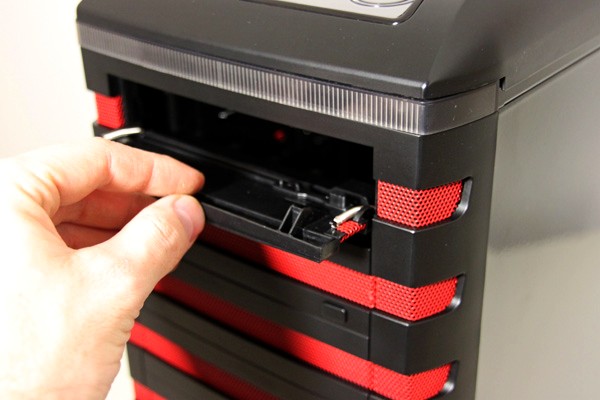 Mounting optical drives requires you to take the front panel off – a simple tug on the bottom will do. On top of the panel you’ll find a blue LED. 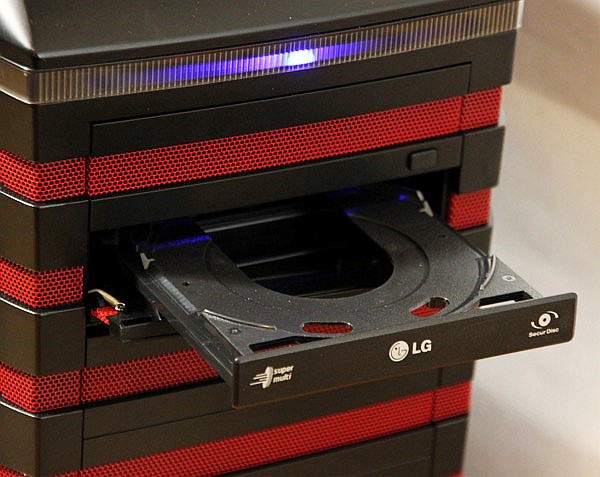 The red stripes are made of fine mesh. Of course, the 5.25’’ bays are entirely closed but the mesh that holds Cooltek logo acts as an air inlet. Behind it is a thin dust filter protecting the 12cm blue LED fan. 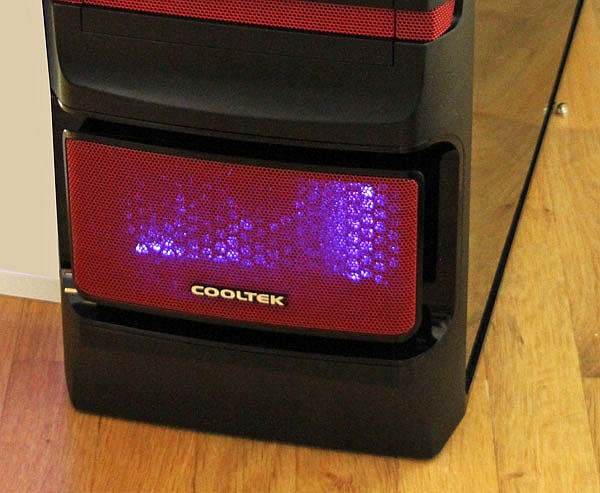 Control panel is neatly placed and packs plenty of connectors. 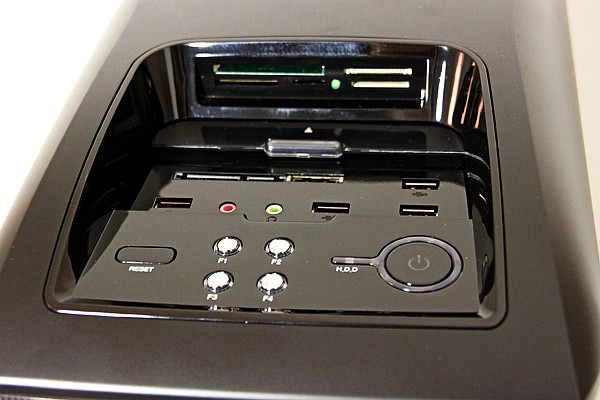 The control panel houses four keys for turning preinstalled fans on and off. The fans run at fixed RPM and they’re quiet; all the fans except the one on the rear panel have a blue LED. The fans as well as the control panel keys come with 2-pin connectors.

The panel has no hot-swap nor USB 3.0 connectors but it does come with one SATA power and one SATA data cable that can be used to connect SATA devices. Cooltek again seems to have thought of everything and ships the aforementioned cables with the case.

The panel also houses one eSATA connector and four USB 2.0 connectors between. USB connectors are nicely spaced apart and you’ll find plenty of space for those thick USB sticks. Same goes for audio connectors. The final touch is the All-in-One card reader and the plastic cover which can be used to prevent the control panel from getting dusty. 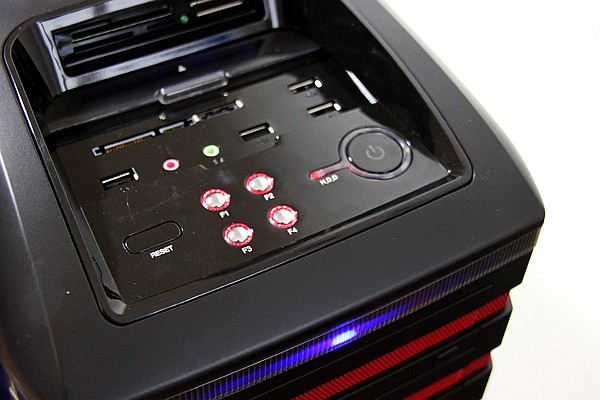 Behind the control panel is the red mesh again, hiding two 120mm fans. 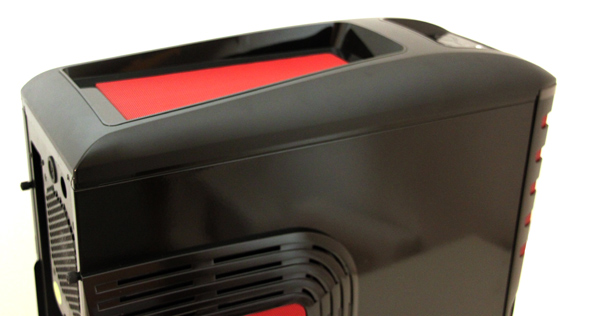 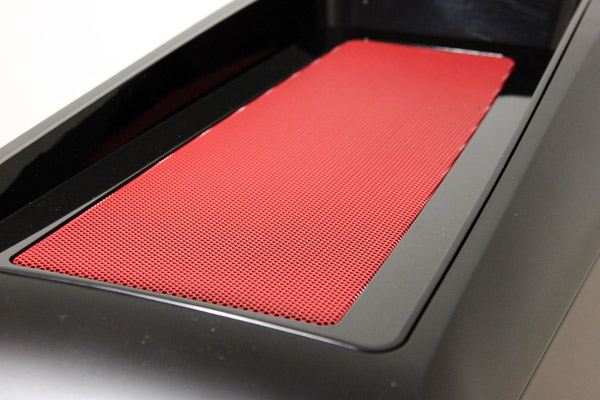 Cooltek used dust filters on top of the case as well. The fans also have blue LEDs.

The left panel (picture below) has a plastic handle and also comes with a dust filter. However, Cooltek obviously didn’t intend to use a fan here. 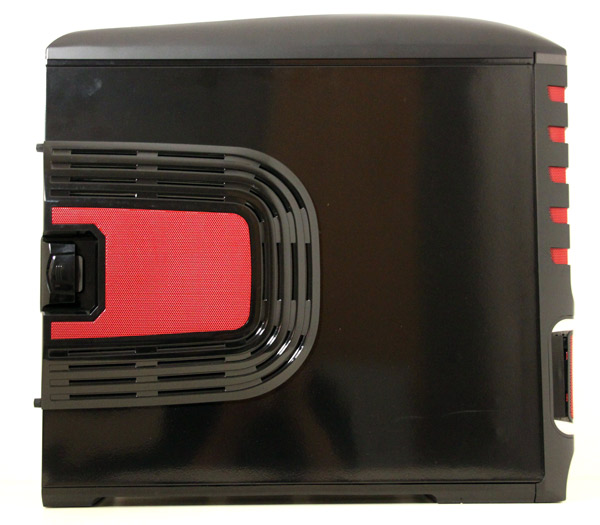 Cooltek made a special mechanism for opening the panels, making sure that the panel doesn’t open even when not fixed with screws. Pressing the mechanism and a light tug will make the side panel come off easily. 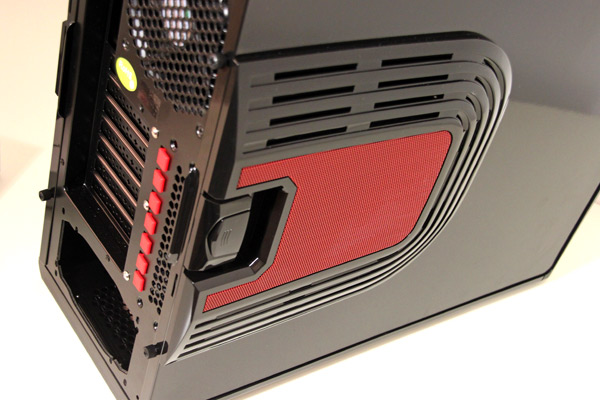 Same procedure is valid for the right side panel. 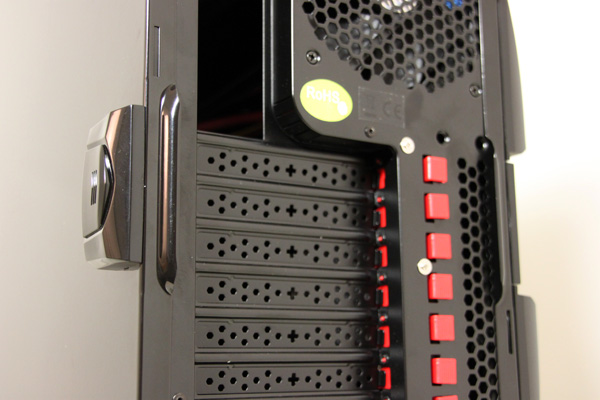 We’ve already shown you few pictures showing the rear of the case, where you can see 7 expansion slots. The PSU is on the bottom of the case. Unfortunately, we lost the rubber cap that’s supposed to cover the water-cooling holes. 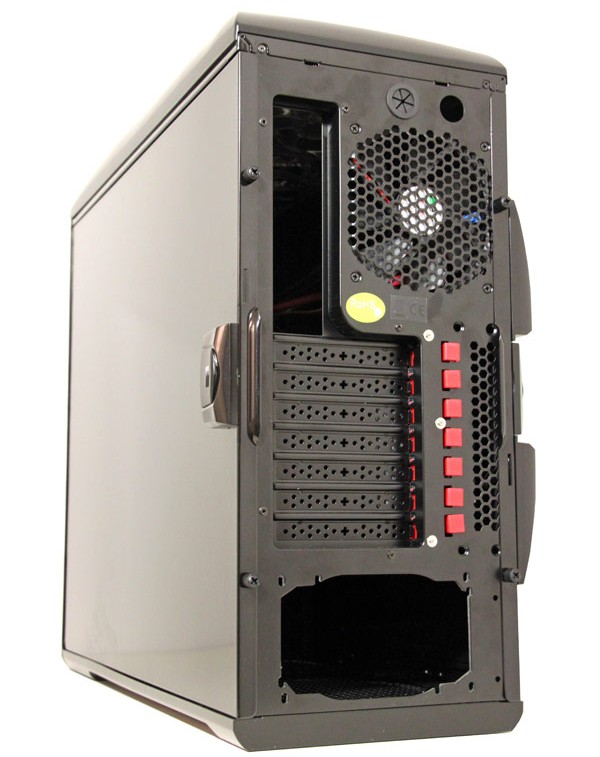 Judging by what we’ve seen so far, Cooltek’s case is promising – but we won’t get ahead of ourselves. We’ll soon have our full performance test results so stay tuned.