MSI to unveil its 500 series motherboards on January 27th 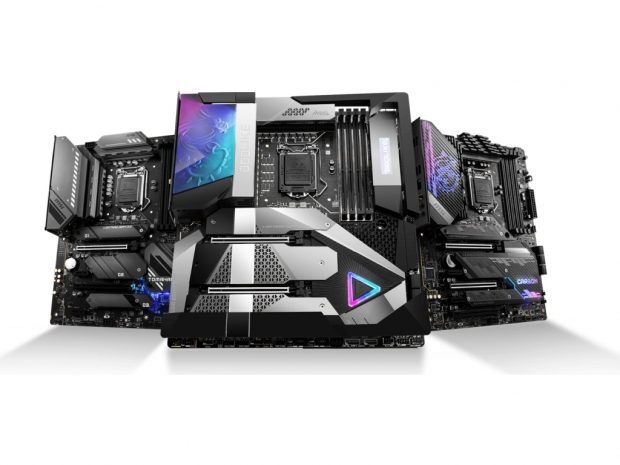 Following Intel's announcements, MSI has announced that its 500 series motherboards will be officially announced on January 27th, coming in all the popular MSI series, like MEG, MPG, MAG, and PRO.

MSI is promising plenty of new features and improvements for its 500 series motherboards, including support for Gen 4 PCIe, latest WiFi 6E, as well as a completely upgraded audio performance on MEG, MPG and MAG series with Audio Boost 5 and Sound Tune.

MSI has given some details about the upcoming lineup:

MEG - Exquisite and gorgeous are definitely the best descriptions for MEG series. Besides elegant designs, MEG Z590 GODLIKE has mighty specifications, including 10G Super LAN and Audio Boost 5 HD. Additionally, for better cooling effect, MEG Z590 GODLIKE has Stacked Fin Array and Frozr Heatsink Design. Furthermore, both MEG Z590 GODLIKE and MEG Z590 ACE have aluminium backplate on the back of PCB, which can extend the surface of heat dissipation. Of course, MEG Z590 UNIFY and MEG Z590I UNIFY, well-known as the full black design, will also show up. At CES online press conference on 14th January, MEG series will come on the stage.

MAG - MSI tries to refresh MAG lovers with new color matching. MAG Z590 TOMAHAWK WIFI and MAG B560 TOMAHAWK WIFI both have graphite extended heatsink. The color of MAG Z590 TORPEDO and MAG B560 TORPEDO is pacific blue, and MAG B560M BAZOOKA is midnight green. The concept of color derives from military colors in accordance with MAG—MSI Arsenal GAMING. The various colors give users more choices and users can personalize PCs based on their preferences.

PRO - For common use, including business and daily use, Z590-A PRO and Z590 PRO WIFI have matte black with linear designs and both have Extended Heatsink Design. Otherwise, most PRO series motherboards, including Z590, B560 and H510, will have new cooling solution—Frozr AI Cooling, which will detect CPU and GPU temperatures and automatically adjust system fan duty to a proper value. In order to dissipate heat effectively, Z590 PRO WIFI and Z590-A PRO both have M.2 Shield Frozr which is made up for giving out heat from M.2 Gen 4.

MSI is holding a big event soon and we are looking forward to seeing what the company has in store for the future.

Last modified on 13 January 2021
Rate this item
(0 votes)
Tagged under
More in this category: « AMD launches new Ryzen 5000 Mobile processors BeagleV board announced »
back to top