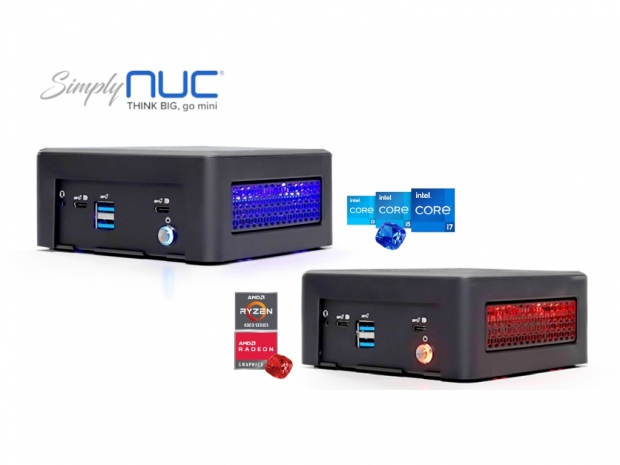 In case you missed it earlier, Simply NUC is a mini PC/NUC oriented company from Round Rock, Texas, USA, that has been operating in the UK for the last 3 years and has recently opened up its newest European office in the Republic of Ireland.

Today, the company has announced two new high-end mini PCs, Ruby and Topaz, that will be available in December and early January, and use the same Simply NUC’s Universal Chassis. The chassis has a replaceable lid expandable functionality and comes with support for DIN or VESA plate mounts, with either the 65W or 90W power supply adapter, and support for Serial Port with a header on the board (RS 232).

Both the Ruby and the Topaz share a lot of similarities, and in addition to the same Universal Chassis that is similar to the Intel NUC "tall" chassis, both come with support for 4x video output with 4K support, six USB ports, and dual Ethernet ports with 2.5GbE and 1GbE port, as well as Intel WiFi 6 AX200 and Bluetooth 5.0 support.

Topaz gets Tiger Lake and ships in January

All three are likely to offer a significant improvement in both CPU and graphics performance compared to Intel's 10th gen Frost Canyon NUCs.

All three Topaz mini PCs come fully configured with 4GB of DDR4 memory, 128GB of SSD storage and "free" OS installation (Ubuntu for free or Microsoft Windows for a fee). Of course, you can configure each one by adding more memory, more storage in primary and secondary M.2 ports, different OS options, and various accessories.

Ruby is all about AMD and Renoir, ships in December

The Simply NUC has chosen the red Ruby as the code name for its AMD Renoir-based mini PC, which is not a big surprise, but it will pack quite a punch considering its size.

Of course, you can push all options to the sky with additional storage, including up to 64GB of RAM, 8TB of PCIe M.2 primary SSD storage, and up to 2TB of SATA SSD secondary storage, OS, extended warranty, and more.

Mini PCs with high-end configurations are quite rare these days, and there is a handful of such on the market, especially with the latest CPUs like Tiger Lake or Renoir, and only recently ASRock has brought a 4x4 one with the same Ryzen 4000-series CPUs, but that one is still hard to find in retail.

In any case, it will be interesting to see how well Intel and AMD compete when placed in the same chassis, especially considering a similar price point.

Last modified on 09 December 2020
Rate this item
(3 votes)
Tagged under
More in this category: « Tame Apple Press continues to hype M1 AMD close to producing an ARM chip »
back to top