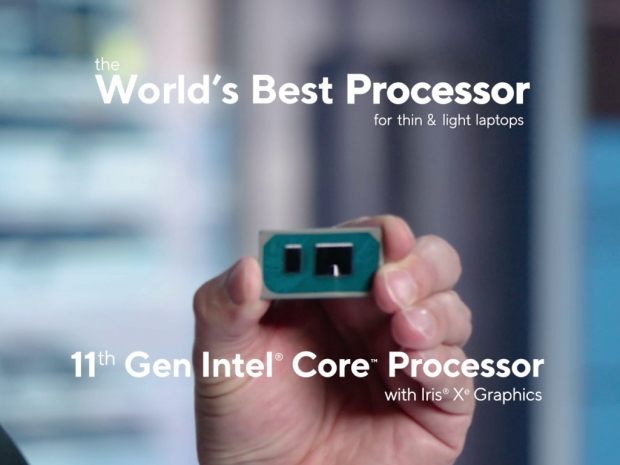 Although most of the details regarding Intel's new 11th gen Core CPUs, codename Tiger Lake, has already been detailed during the Intel Architecture Day 2020, today we have details about the SKUs and their details, performance, and Intel's new Evo Platform.

As detailed during the Architecture Day 2020, Intel's 11th gen Core Tiger Lake CPUs are built on Intel's new 10nm SuperFin technology, features new Willow Cove CPU cores, Iris Xe Graphics, and a new memory controller. The CPU part will have up to 4 cores and 8 threads, up to 4.8GHz clock, and provide up to 24 percent higher CPU performance compared to Ice Lake.

Today, Intel is revealing a few more consumer-oriented details, including all the SKUs, general performance as well as its new Intel Evo platform. Gregory Bryant, executive VP and GM of the Client Computing Group, announced it as the world's best processor for thin and light laptops, 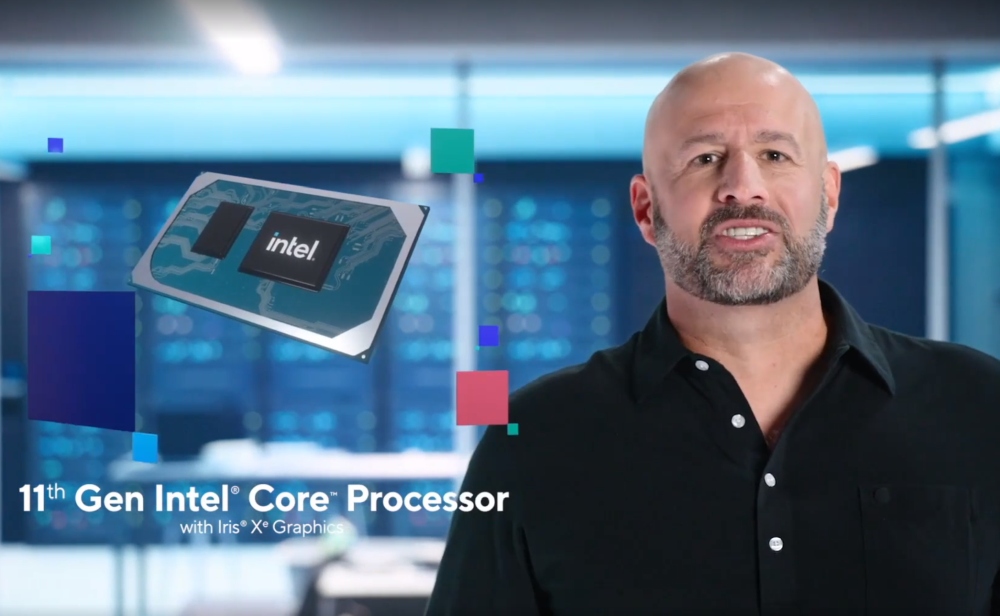 The Iris Xe graphics comes with up to 96 EUs for 2x higher performance and Intel Deep learning Boost for AI. The memory controller supports up to 32GB of LP4/x-4266 memory or up to 64GB of DDR4-32000 memory.

Intel's Boyd Phelps, corporate VP of client engineering, was keen to explain all the benefits of the new 10nm SuperFin technology as well as detailing what Intel gained with more power headroom which was the end result, including over 20 percent higher CPU performance, up to 2x higher graphics performance with Xe GPU, and 5x better AI performance with DP4a instructions on the GPU. 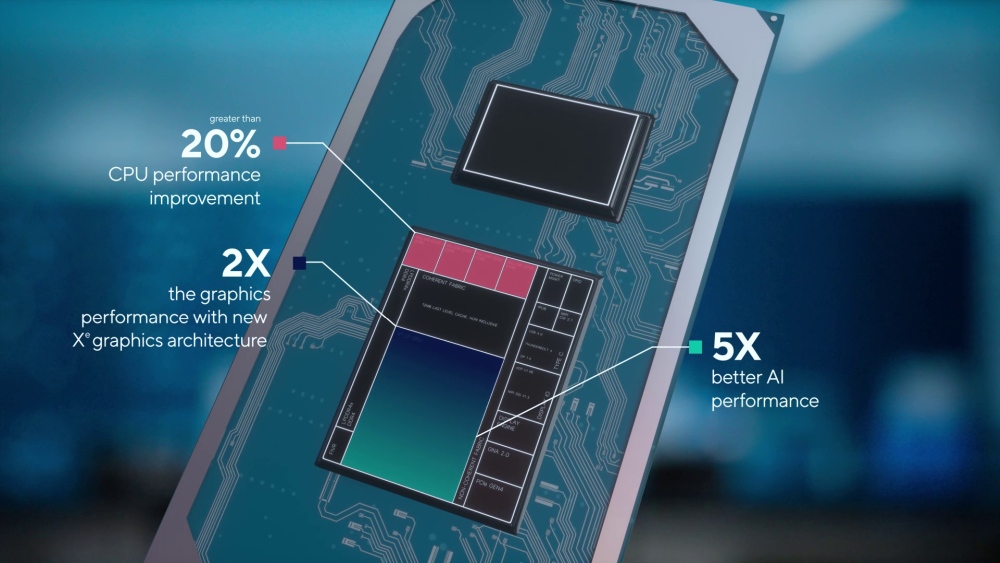 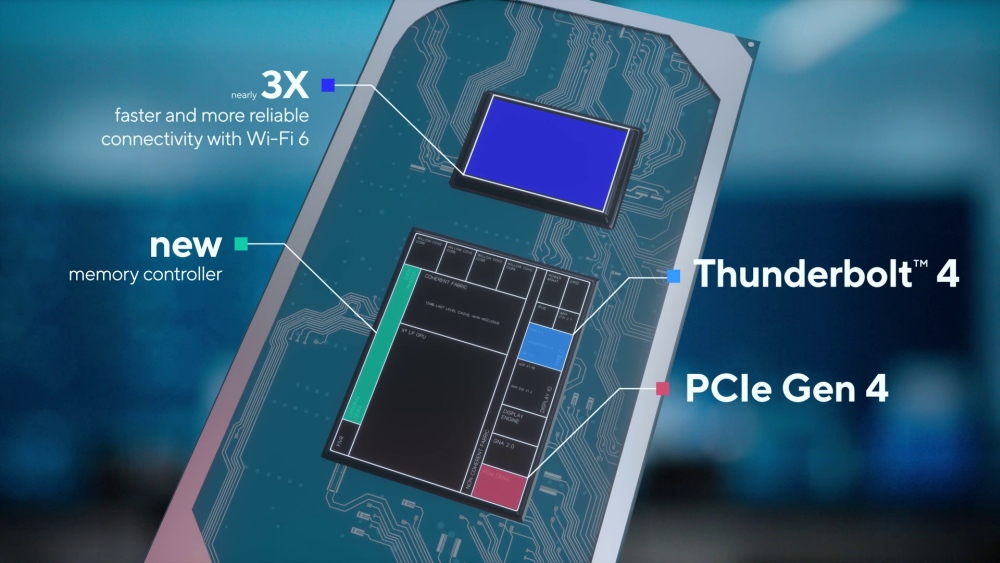 When it comes to benchmarks, Intel's Ksenia Chistyakova, product marketing engineer for AI and media, decided to go for real-world applications, comparing 11th gen Core CPU with AMD's Ryzen 4800U platform. While colorizing old photos with Photoshop Elements and upscaling them using Topaz Gigapixel AI, Intel platform performed over 100 percent faster, and in video processing and exporting in Adobe Premier Pro, it was nearly 200 percent faster when encoding video in HEVC. 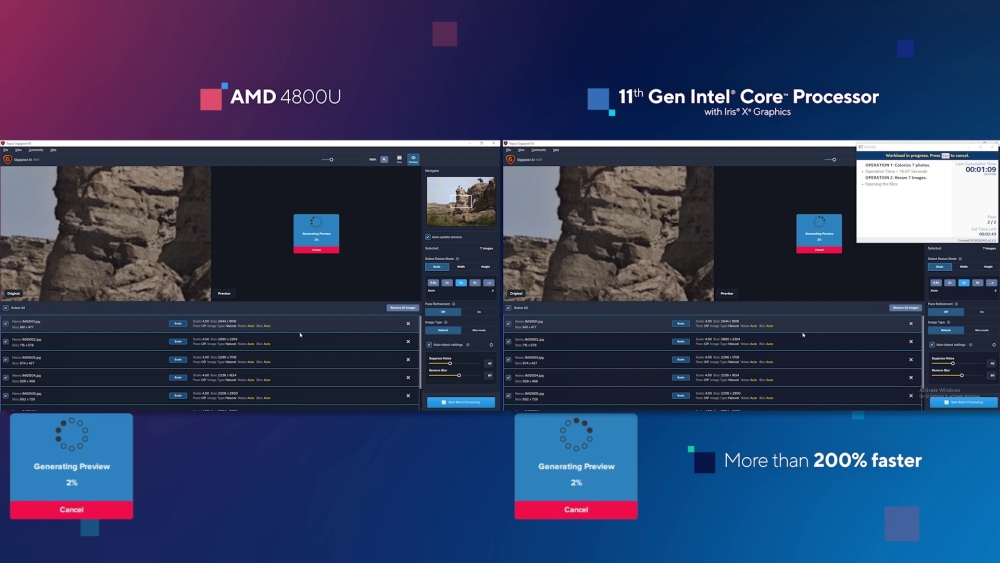 The same thing goes for gaming, as those two platforms were compared next to Intel's 10th gen Intel Core with Nvidia MX350, running GRID, where Intel's new platform was able to push over 55 FPS, while two other were struggling at around 30 FPS. Similar situation resulted in Gear Tactics, where Intel's new 11th gen platform was close to 60FPS, AMD hit 30FPS and 10th gen Core with MX 350 hit around 50 FPS. 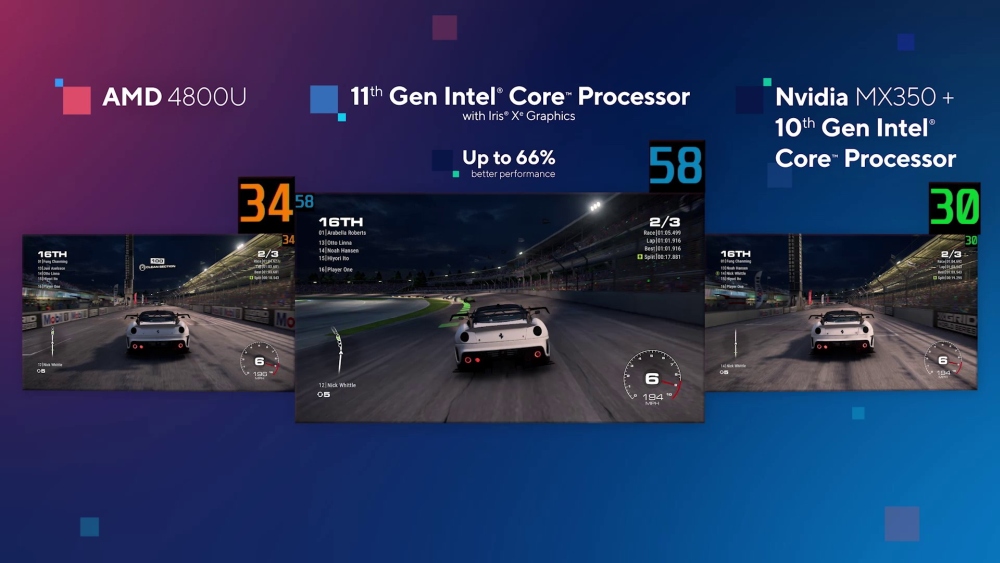 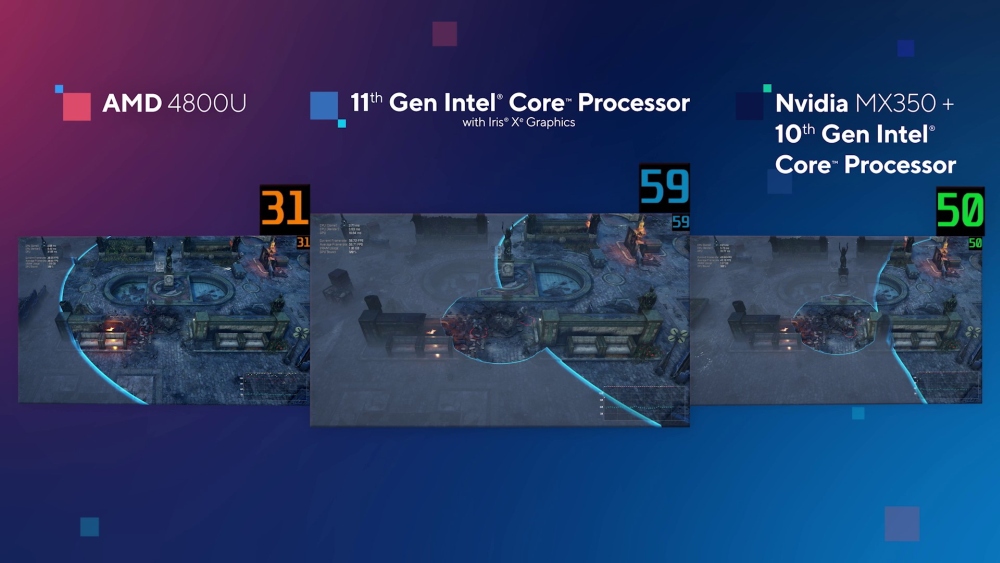 There is a total of five UP3 class SKUs, and basically, G7 parts will have Intel Iris Xe graphics while G4 parts will stick with Intel UHD graphics. There are a total of two Core i7, one Core i5, and two Core i3 parts, with only the Core i3-1115G4 being a dual-core with HyperThreading, leaving it with 6MB of cache.

It is a similar situation with UP4 class, 7-15W SKUs. You get a single Core i7 SKU, one Core i5, and two Core i3 parts, with only the Core i3-1110G4 being a 2-core/4-thread part. Bear in mind that UP4 SKUs have lower GPU clock as well as much lower CPU frequencies all across the board, all to fit that 7-15W envelope.

Intel EVO platform is the result of the Project Athena

Intel has been driving the Project Athena idea for quite some time and the result is the Intel Evo badge, which will ensure that those bearing that badge will provide the best possible laptop experience.

“With Project Athena, we’re partnering with the entire ecosystem to innovate beyond the CPU" said Chris Walker, corporate VP of mobile computing. “This includes the motherboard, component and cooling design technology, enabling miniaturization for new form factors with better performance and battery life.”

According to Intel, the new Intel Evo badge will only "stick" to laptops that hit certain targets, and according to what we could see from the sheet, it will only be available with Core i7 and Core i5 CPUs. Some of those targets include consistent responsiveness on battery, system wake from sleep in less than one second, nine or more hours of real-world battery life on systems with FHD displays, and fast charging with up to a four-hour charge in under 30 minutes on systems with FHD displays. 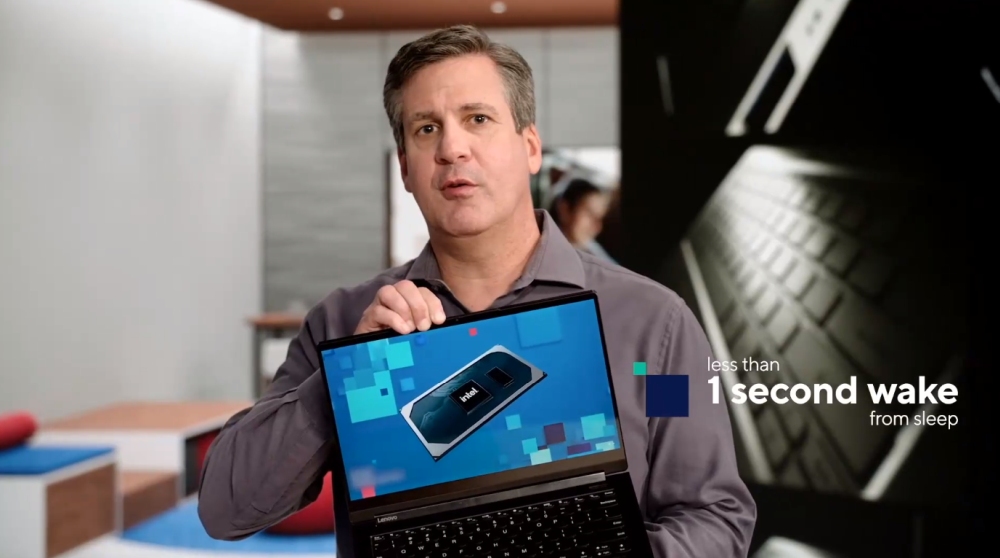 Intel Evo laptops will also come with Thunderbolt 4 and Wi-Fi 6, as well as premium audio, webcam, and display, all packed in a premium thin-and-light form factor. 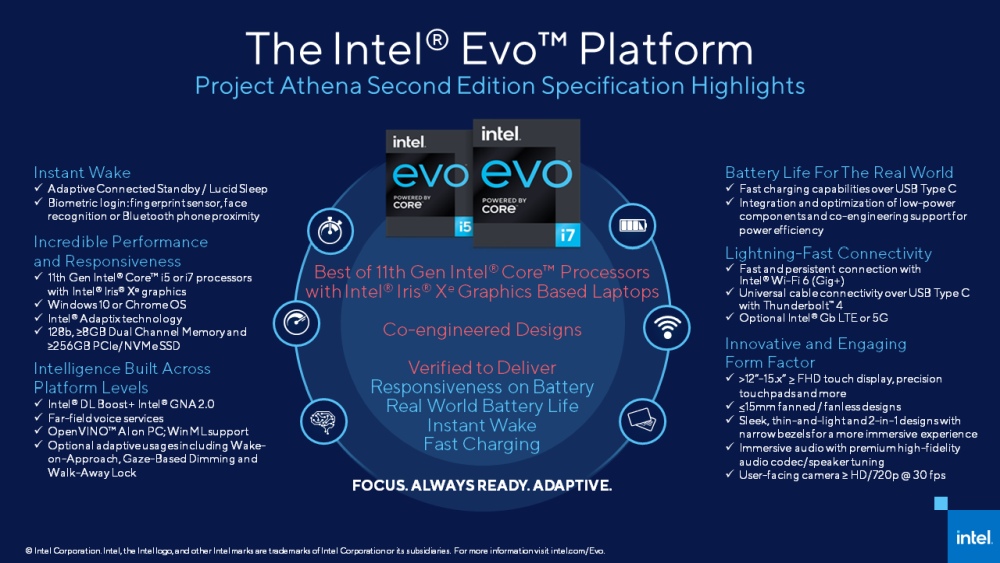 Intel will have plenty of design wins, citing over 150 for the 11th gen Core CPUs and over 20 verified designs with Intel Evo badge. Some of the partners mentioned include Asus, Dell, Dynabook, HP, Lenovo, LG, MSI, Razer, and Samsung. We will also see a next-generation Chromebooks powered by 11th gen Intel Core, as John Solomon, vice president of ChromeOS, was keen to unveil. 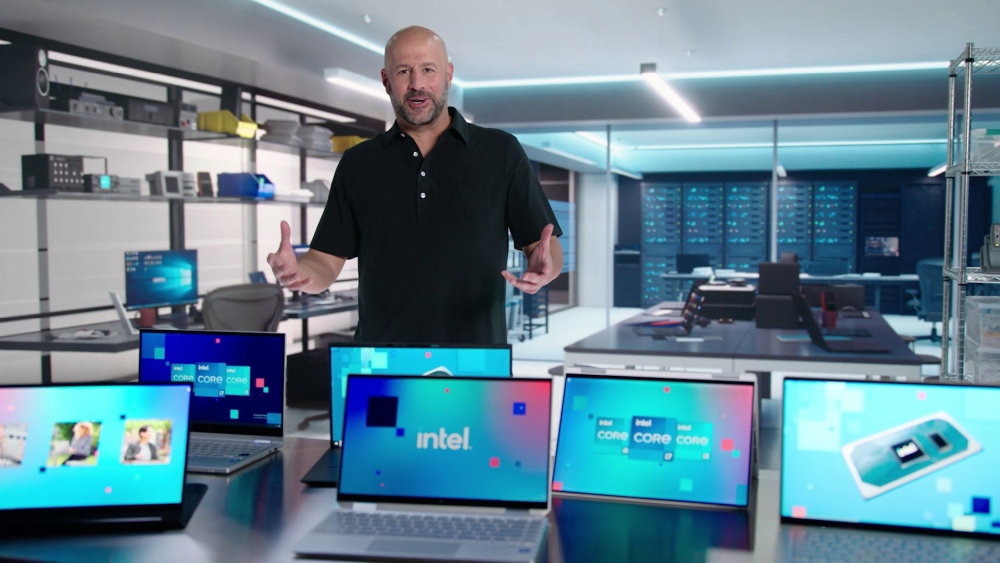 Last modified on 03 September 2020
Rate this item
(2 votes)
Tagged under
More in this category: « Apple to release an even more anorexic MacBook Samsung closing gap on TSMC »
back to top