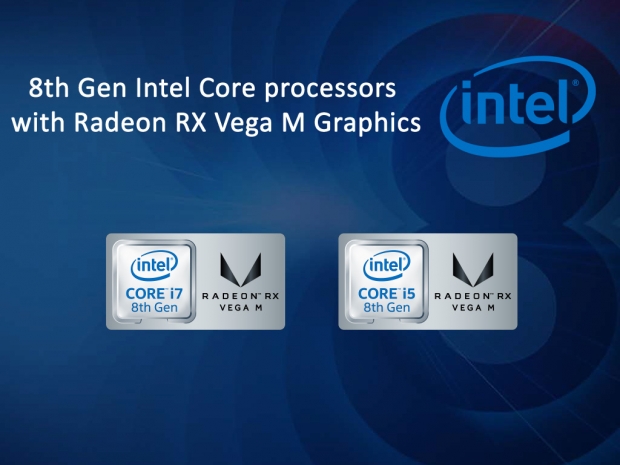 One of the biggest surprises we have seen in recent history puts Intel's CPU next to AMD Radeon RX Vega GPU on the same multi-chip package, and it has now been officially announced as the "Intel 8th Generation Core with Radeon RX Vega M Graphics".

All five SKUs use the same quad-core Kaby Lake CPU with Hyper-Threading and Intel HD 630 graphics connected to a Radeon GPU with HBM2 memory via PCIe Gen3 x8 interface, leaving the rest of the PCIe lanes for other connectivity options. Intel was also quite keen to note that it managed to significantly reduce the silicon footprint by over 50 percent and keep the CPU and GPU z-height at 1.7mm, mostly thanks to its EMIB (Embedded Multi-die Interconnect Bridge) technology. 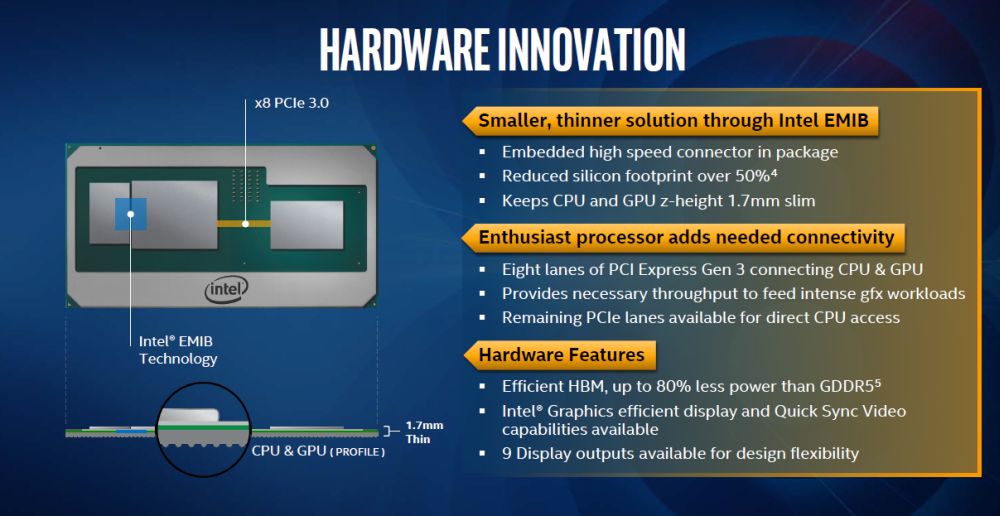 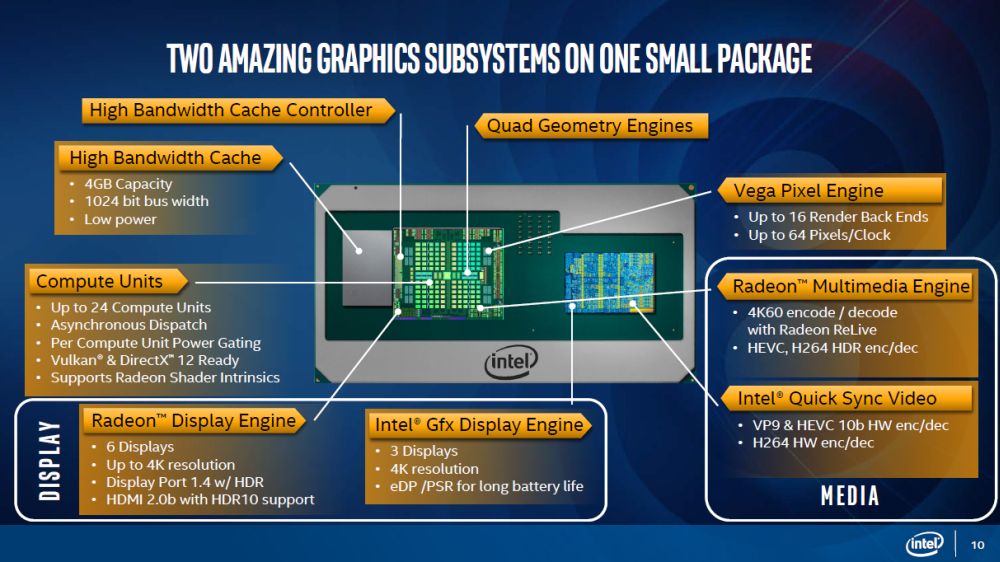 The entire lineup uses the BGA package type and ought to bring some impressive performance to future notebooks. Intel claims that these chips will offer a 3x boost in FPS in devices as thin as 17mm. These will also end up mostly in SFFs like the 2-in-1s, thin and light notebooks, and mini PCs, like the newly announced Intel Hades Canyon NUC.

The Core i7-8809G is the highest offering in the lineup and this is an "unlocked" part which will offer overclocking for the CPU, both GPUs, and HBM, so it will be interesting to see how far it can be pushed.

Intel has also released some of its internal benchmarks which shows some impressive results in both productivity and gaming benchmarks and applications, at least compared to a three year old notebook and desktop. 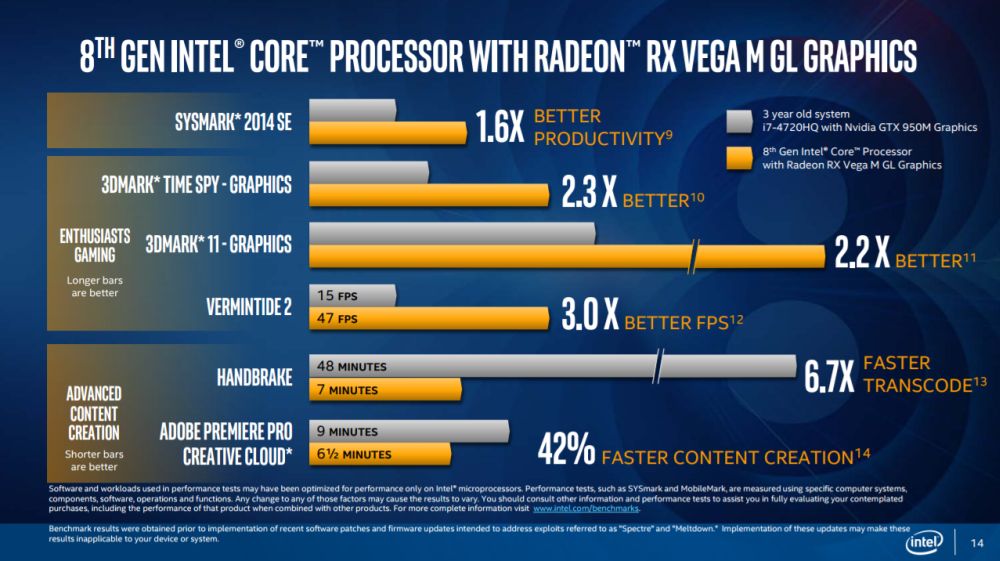 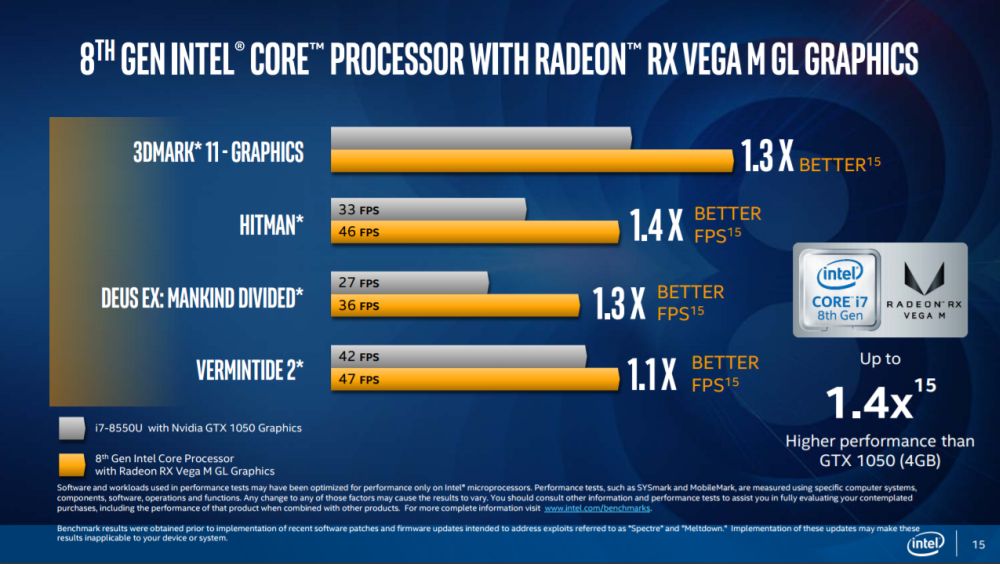 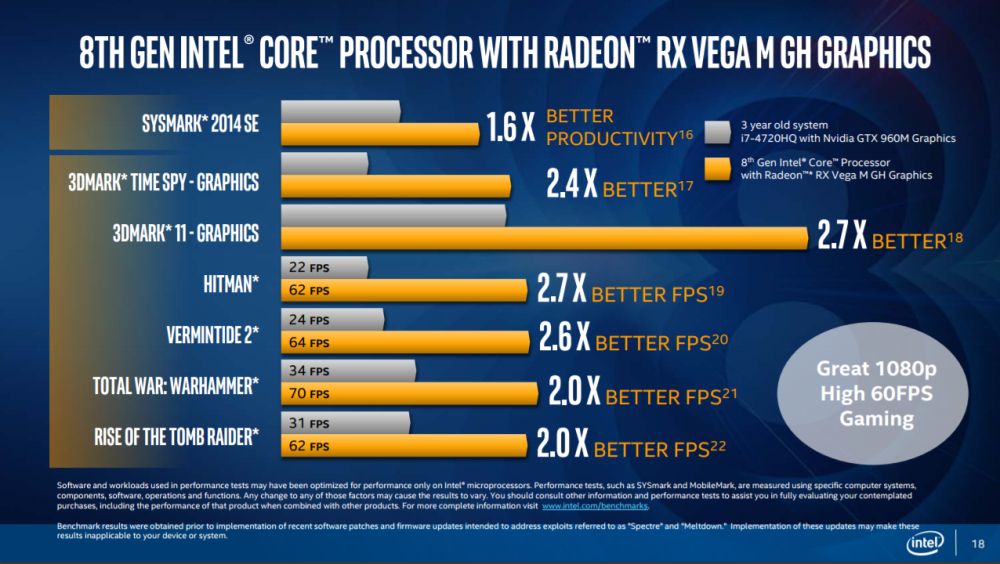 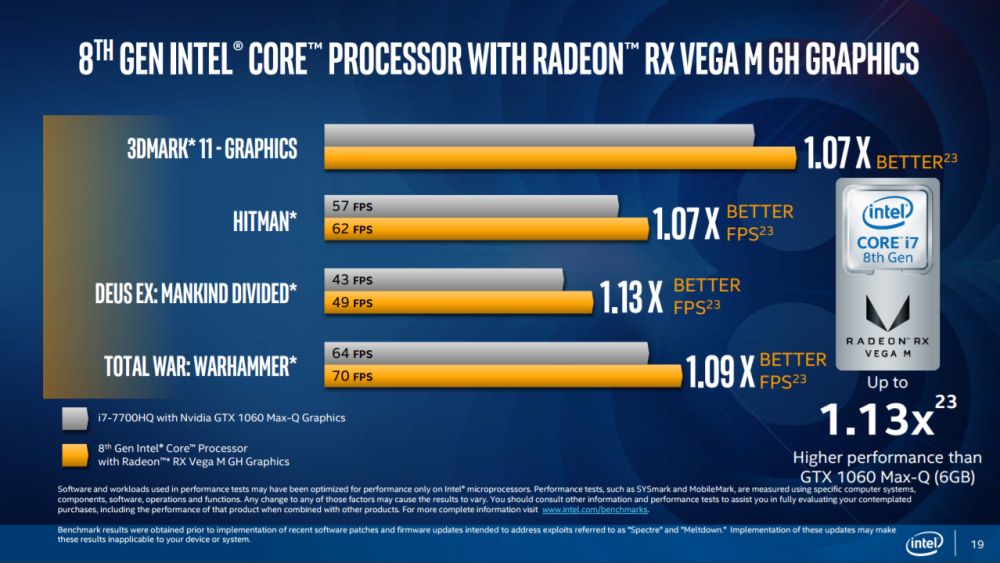 There will probably be plenty of 2-in-1s, thin and light, and other notebooks and SFFs announced with new Intel 8th Generation Core with Radeon RX Vega chips, but officially, Intel is teaming up with HP, which has already announced its Spectre x360 15 with Core i7-8705G, Dell, which should show something tomorrow, and its own Hades Canyon NUC, coming with Core i7-8809G or Core i7-8705G, depending on the SKU.

Last modified on 08 January 2018
Rate this item
(0 votes)
Tagged under
More in this category: « AMD suffers from an "Intel like" bug AMD cuts Ryzen prices »
back to top