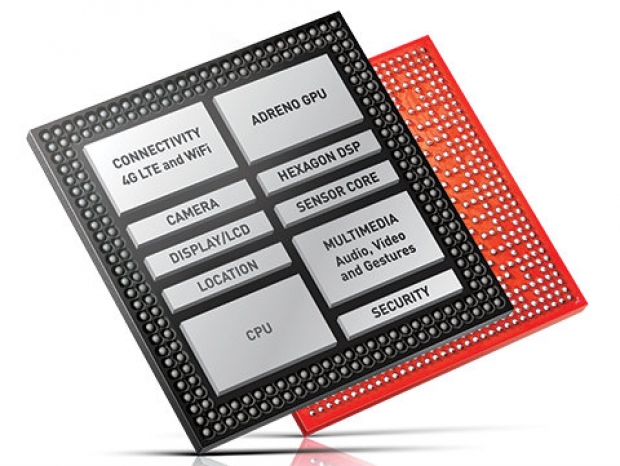 Qualcomm has announced its Snapdragon 620, a successor to the reasonably successful Snapdragon 615.

The new chip is Qualcomm’s first to feature a brand new quad core cluster of four Cortex A72 1.8 GHz cores and four more A53 based 1.2GHz cores.

The new Qualcomm chip supports dual channel LPDDR3 memory at 933MHz and the as yet unidentified next generation of Adreno graphics which will probably be branded as 5xx series. Qualcomm promises to support the latest graphics APIs, hardware tessellation and geometry shading.

The new SoC, which targets the mainstream phones, comes with support for Cat 7 speeds of up to 300 Mbps down/100 Mbps up via 2x20 MHz carrier aggregation in the downlink and uplink on LTE FDD and LTE TDD. The SoC supports LTE Broadcast, LTE multimode dual SIM and VoLTE with HD Voice and SRVCC and comes with Qualcomm VIVE 1-stream 802.11ac, Qualcomm IZat location services, USB 2.0 and Bluetooth Smart 4.1.

The higher end Snapdragon 820 comes with four Hydra based cores and 14nm manufacturing node. We are not sure what function the mainstream Snapdragon 620 processor will have for Qualcomm.

If you look more carefully at Snapdragon 620 you will notice that this chip is a declocked version of Snapdragon 810, but it comes with Cortex A72 instead of Cortex A57.  This promises to bring the performance close to Snapdragon 810 to the mainstream market phones in early 2016.

Snapdragon 820 is expected to be the performance leader in Qualcomm land and we expect to learn a bit more about the chip this week.

Last modified on 10 August 2015
Rate this item
(5 votes)
Tagged under
More in this category: « Nvidia GeForce GTX 990M GPU for notebooks Intel puts Xeons into notebooks »
back to top