Kaveri has been in the news for months and many believe it is AMD’s most important processor in years. It is the company’s first mainstream APU fabricated on GloFo’s 28nm bulk node. Richland was a 32nm part, Jaguar-based products are still built by TSMC, in 28nm of course.

In terms of overall performance Kaveri looks promising. AMD says it will deliver a 20-percent IPC boost in some scenarios, which is nice bump, courtesy of new Steamroller CPU cores. However, the clocks are rather conservative – as reported earlier the A10-7850K will be clocked at 3.7GHz and it will hit 4GHz on turbo, which is about 10 percent less than the Richland part it replaces. This is good news for thermals and yields, since Kaveri is simply more efficient. 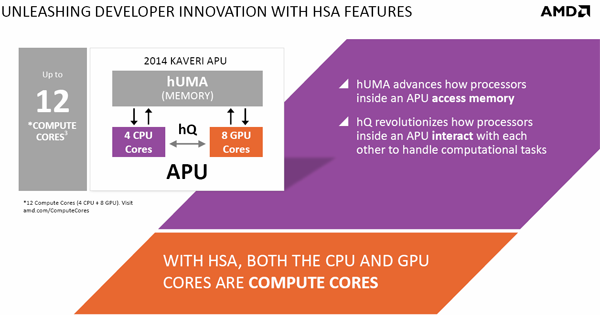 The GPU is even more interesting. With up to 512 GCN cores, some Kaveri parts should be able to easily outpace entry-level discrete cards from a couple of years ago. As if that wasn’t enough, there’s Manlte. AMD is promising a performance boost of up to 45 percent in Battlefield 4 and unsurprisingly the top Kabini SKUs will be available with BF4 bundles.

AMD’s performance claims are impressive. The A10-7850K can easily outpace the A10-6800K and Intel’s Core i5-4670K. The biggest improvements are yielded by the new GPU architecture. AMD also points out that SHA could speed up certain applications by a factor of 8, but this only applies to optimized applications, so real world performance won’t reflect these gains in most situations.

AMD no longer distinguishes between CPU and GPU units, it calls all of them Compute Cores thanks to hUMA. In theory hUMA should be able to distribute load more efficiently between the CPU and GPU, offloading the CPU in some situations. However, like HSA much of the advantages offered by hUMA have yet to materialize in the real world.

The move to 28nm also brings a change in power requirements. Richland desktop parts came in 65W and 100W versions, while Kaveri should be available in 45W to 95W flavours. This should make it a bit more attractive for small form factor PCs and AIOs, as it should be possible to use 45W desktop parts in lieu of mobile parts.

There are still a lot of unknowns but Kaveri is shaping up to be a very nice upgrade, although it is no game changer. Here are a couple of juicy rumours we heard through the grapevine. Pricing should be great, which is not surprising as AMD has a long tradition of offering better value than Intel. Mantle support on cheap APUs has a few non-AMD people concerned. Bear in mind that this is just the first GCN mainstream APU (Jaguar is out of the equation). It might take a couple of years, but Mantle could make a big difference, rendering low-end discrete cards even more pointless. At the same time it will solidify AMD’s IGP lead, which is bad news for Intel.

All in all, we don’t expect Kaveri to turn the tables on Intel or anything, but it is very promising. The big question is Intel’s fab lead. Intel’s decision to reserve Broadwell for mobile may bode well for Kaveri, but in the long run Intel will still have a huge lead, especially in mobile. 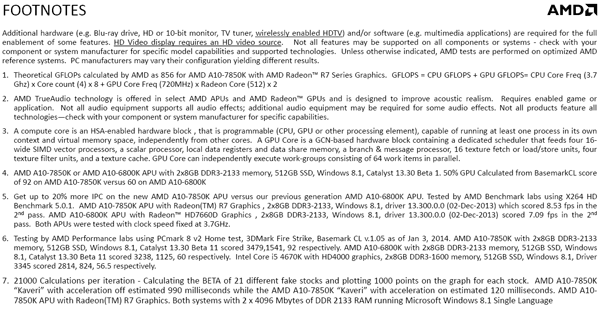 Rate this item
(0 votes)
Tagged under
More in this category: « Qualcomm announces Snapdragon 802, 602A Qualcomm to have 20nm chips later this year »
back to top